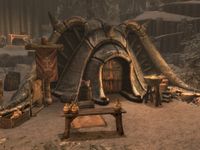 Alor House is a house in Raven Rock that is home to Fethis Alor and his daughter Dreyla. It is found in the market square between the path to Raven Rock mine and The Retching Netch.

In front of the house is where Fethis Alor generally sits to sell his wares. There is a narrow table out front with five bottles of sujamma on top. There are several barrels, an open box containing two further bottles of sujamma and a tanning rack to the left of the house as you look at it. Among the barrels is a woodcutter's axe. To the right is a lit brazier on a stand, a wood chopping block, woodcutter's axe and two urns.

You enter into the upstairs of a typical Solstheim house. On your left are three straw bales, several barrels, one of which has a bottle of alto wine and a bottle of wine on top, an open box containing a copy of Words of the Wind, a table containing two bottles of sujamma, a bottle of shein, two bottles of alto wine and three bottles of wine and a note to Dreyla. Opposite the entrance is a cooking pot in front of the fire. To the right are more barrels, a firewood pile, various sacks and an urn. To the right of these is a sideboard with a large coin purse and lantern on top and a complete set of The Poison Song books on a shelf underneath. More boxes, crates and barrels are between this and the entrance. In the center of the room are the stairs leading down to the main living quarters, with more straw bales, urns and a bench around the sides.

At the bottom of the stairs are two barrels on the left. Through a doorway you will find rooms off to the southeast and northeast and a crafting area ahead. There are several barrels, crates, boxes, a mead barrel, sacks and an urn. There is also a tanning rack, grindstone and workbench in front of you. To the right of the grindstone is an open crate containing seven iron ingots and a chair. To the left of the grindstone is a table with a bottle of sujamma on top.

The bedroom to the northeast is Dreyla Alor's room and contains five barrels, a bench, a single bed, a bookcase holding an unlocked chest, copies of The House of Troubles, all three volumes of History of Raven Rock, two lockpicks and several red and green apples. To the left of this is a sack and to the right of the bed is a table and chair. On the table is a copy of Bone, Part I and a bottle of shein.

The bedroom to the southeast is Fethis Alor's room and contains a double bed with an unlocked chest at the end. To the right of the bed is a sideboard with a bowl of cabbage potato soup, a potion of stamina, a bottle of sujamma and a copy of The Red Year, Vol. I, underneath on a shelf is a copy of the Heavy Armor skill book Hallgerd's Tale. At the back of the room are three barrels with a table and two chairs between them. On the table are three loaves of bread, an East Empire Company strongbox, a steel war axe and a copy of The Axe Man. Opposite the bed against the south wall is a bookcase containing two empty petty soul gems and a large coin purse. On the floor in front of it are three letters to Fethis Alor titled first letter from EEC, second letter from EEC and third letter from EEC. Between the bookcase and door are two urns containing ingredients.