Ahjazda, the owner of Things Found asks you to retrieve three items for her so that she may prepare for "The Coming Storm". The three items she needs are as follows: the Ring of Desiccation, the Calming Pants, and the Amulet of Disintegration.

The Ring of Desiccation is located in the Museum of Oddities in Crucible. It is in a locked display case on the second level of the building; if you ask Una Armina for a tour of the museum, she will show you the exact location. Due to a bug you can take the ring from right in front of her eyes and she will not care. 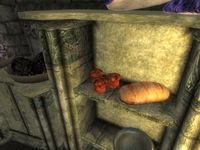 If you speak to the beggar, Fimmion, about the Calming Pants, he will request a sweetroll. You can trade a sweetroll for the pants. You can also kill him and take the pants from his body. If you'd prefer the non-violent option, one source of sweetrolls in Shivering Isles is to steal them from Rendil Drarara's kitchen. Don't give Fimmion more than one sweetroll, as he will give you a number of pants (see Bugs). You will not be able to turn them in because you have more than one, blocking the quest.

The Amulet of Disintegration is located in the ruins of Milchar, located in the northwestern section of Mania. Locate the entrance to Milchar, Tieras, make your way to Milchar, Chatterhall and you will find a room containing a chest and a Ritual Torch. If you try to pick up the torch you will receive a message saying it "can be held by any but owned by none". If you use the grab key, you can move the torch without adding it into your inventory. Using a Telekinesis spell may also improve your grip. Use the torch to light the three braziers in the room. Be aware that the brazier fires will extinguish after a few seconds, so you will have to be quick in lighting all the fires. When all braziers are lit at once, you will be able to open the Diligence Crux in the middle of the room. This urn holds the amulet.

Return to Ahjazda with your items. In return she will teach you the Greater Power "Ahjazda's Paranoia" which is Frenzy up to level 25 in 50 ft for 10sec on Touch.