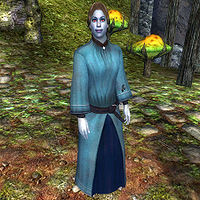 Mirili Ulven is a Dark Elf sorceress living in the settlement of Highcross. She is very focused on her research into the life forms of the Shivering Isles, its weather changes, and the cycles of the moon and stars.

She wears a mage's robe and a pair of huntsman moccasins. She is equipped with an enchanted dagger and carries her key and a variable amount of gold. Mirili knows spells from the Alteration, Destruction, Illusion, and Restoration schools of magic. She also possesses a unique fortify health ability that raises her health by 150.

At different stages in the Main Quest, Mirili will share different rumors with you and other NPCs:

These spells are only buyable after reaching the Bestiary stage of Taxonomy of Obsession and cannot be bought once the quest is completed. The spells must be bought through dialog options, instead of the usual Spell Service button.