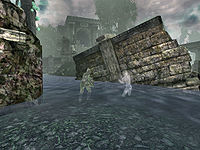 Asking around in New Sheoth will net you a few rumors about the ruins known as Vitharn. A map marker will be placed on your in-game map, due south of Fellmoor. Once you reach Vitharn, you will come across two groups of ghosts fighting each other. Blue tinted ghosts are defending the ruined fortress against their opponents, green tinted spirits that appear to be wearing Madness armor. Upon reaching the main door to Vitharn, you will see it is chained shut and surrounded by a ghostly aura; attempting to enter informs you that "The door is held shut by a supernatural force."

To the left of the door, underneath a large tree, is a root door leading to a set of tunnels underneath Vitharn. The first tunnel, Vitharn Sump, is fairly linear and you will encounter three respawning ghosts, the last one hiding underwater near the exit. The next set of tunnels, Vitharn Reservoir, is linear as well, but contains no ghosts. You will discover another chained door on your way, but just keep following the tunnels until you will reach an unchained entrance that leads to Vitharn Keep.

Upon entering the keep, you will encounter Count Cirion of Vitharn. He accuses you of trespassing and demands that you explain yourself. Claiming a desire to "cleanse" Vitharn will anger the count, who will lock the door behind you and refuse to tell you what's going on, forcing you to work it out on your own. Instead, say that you meant no offense and he will go on to tell you that his people are in desperate need of help. Long ago, Fanatics invaded Vitharn and his soldiers failed to hold the gate. The city was overrun and its people slaughtered. As punishment for their incompetence, Sheogorath cursed the ghosts of the fallen to exist in a cycle of torment, re-living the mistakes they made during the invasion so long ago. The Count asks you to walk among his people, determine the mistakes they made, and correct them. This, he believes, will finally release them from their torment. He ends by explaining that no spirit, be they friend or Fanatic, will be able to harm you within the walls of Vitharn.

With your objective in mind, it's time to head to the Bailey and see the battle for yourself. On your way through Vitharn's Main Hall, you can speak with the settlement's residents to hear their thoughts on the siege. Opinions like "Could someone muffle the door? The sounds of combat are disturbing me.", "I'm not some commoner to take up a sword. Let the rabble risk their lives, not me." and "It is the role of lesser men to fight for those of noble blood." should give you an idea of the surprisingly carefree attitudes of the civilians. Once outside, you witness the engagement first hand and must now identify the individuals who failed in their duties. The Fanatics easily rout the defenders, and three ghostly soldiers in particular can be blamed for the ensuing slaughter: 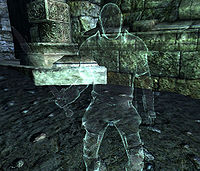 Upon entering the battlefield, you may notice a ghost by the name of Desideratus Annius who keeps running back inside Vitharn Keep. Talk to him and find out why: "My betrothed! I must save her!" or "Please! I must find my betrothed!" Speaking with the other defenders will reveal Desideratus' "betrothed" to be nothing more than a doll, which the soldier left the defensive line to protect. Head back inside and turn left, heading towards the Keep's barracks in the eastern hall. Head for the second of the two sleeping areas, and look for a tattered rag doll sitting on a shelf. This is Desideratus' coveted betrothed. Grab the doll and return to the Bailey. You can try uniting Desideratus with his beloved, but he will just run back inside and place it on the shelf again. Something more drastic is needed to ensure Desideratus remains at his post.

There are two options available. The most obvious is to find one of the fanatics and give him the doll, which will force Desideratus to "rescue" his betrothed. A crueler alternative is to burn the doll in one of the numerous braziers scattered throughout the city, removing Desideratus' reason for running. Once you have made your choice, speak to Desideratus and he will stay on the battlefield and do his duties. 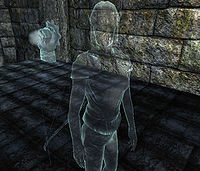 Speaking to the other defenders will reveal that Vitharn's over-protective armorer, Bat gro-Orkul, is responsible. Pay a quick visit to the Keep's northeastern wing, where you will find Bat behind his desk, selfishly hoarding all of the armory's equipment. Even though the ghostly arrows lie right next to him, he refuses to hand them over lest they be damaged or lost. You need to figure out how to take them without Bat's knowledge.

The only way into the armory is through a locked door in the back. You can either pick the lock or head over to the west wing, where you can find the armory key on a table, on the landing between two staircases. Open the door, sneak in and grab Althel's Arrows. If Bat detects you, he will kick you out of the armory and force you to start over. He will not, however, confiscate the armory key. Once you have managed to snatch the arrows, head outside and hand them to Althel. She will be overwhelmed with joy and will finally make her stand against the Fanatics. 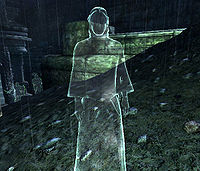 The third and final spirit you must help is that of a mage, Hloval Dreth. You can find him next to Desideratus Annius, trying in vain to cast his spells. Unfortunately, when the first wave of Fanatics runs through the southern gate, he will quickly be slain. Once you talk to him, he will reveal he has a very special problem: "Power! I need power! Unless you can give me the magicka to help these soldiers, get out of my way." Speaking to the other defenders will reveal that Hloval is no ordinary mage: "Hloval dances a little too close to Sheogorath, if you know what I mean. Those born with stunted magicka shouldn't become priests and healers."

There are two methods available to you here, but the simplest involves finding a ghostly Welkynd Stone in the settlement's mausoleum. The ethereal stone can be found in the southern alcove of the crypt, on a ledge above the coffins. With the stone in his possession, Dreth will be able to restore his dwindling magicka and continue the fight against the Fanatics.

The second method is equally effective, but carries with it a negative consequence. In the Keep's chapel to the northeast of the main hall, the ghost of Anglor can be found silently praying in front of two citizens. In the northwestern corner of the chapel, a push button can be found. Once activated, part of the western wall will disappear, revealing Hloval's study. On some shelves, you will find the glowing dagger of depletion. Bring the dagger to Hloval who, unfortunately, will select you as a fine source for magicka. He will then proceed to stab you, transferring all your magicka to him. Once the deed is done, Dreth will finally make his stand and strike down one of the invading soldiers, defending Vitharn as he was supposed to. 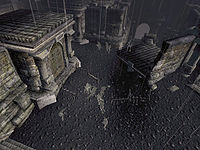 While it seems as though the soldiers are now properly prepared and motivated for the battle, the Fanatics still manage to overwhelm them. Something else must be done. Speak to Count Cirion to learn of the last mistake. After a short conversation, he'll say that he also failed his duty that day by running and hiding. He asks that you take his helm and thus take his place in the defense of the city. The helm is automatically equipped, and while you wear it you will also suffer the curse. You will be unable to leave the city until the battle is won, and you are no longer immune to the weapons of the Fanatics. Go back out into the bailey and position yourself on the raised platform where Althel stands, by the main gate wheel. During the next assault, a Devoted Ghost Fanatic equipped with a leveled, enchanted longsword will charge your position from the nearby gate to Vitharn's Reservoir. Your duty as Count Cirion's replacement is to meet this adversary in combat and defeat him, preventing the Fanatics from opening the main gate. Once the raiders are beaten and the battle is won, Vitharn's curse is finally lifted.

Once the deed is done, the Count will appear and thank you. He will let you keep his helmet, which replaces the cursed version in your inventory. All of the ghosts will vanish from Vitharn and the gates are finally unsealed.