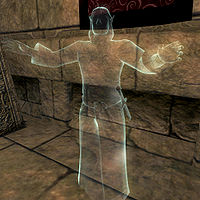 Anglor is a Wood Elf conjurer and resident of the ruined city of Vitharn, which was overrun by its own brethren centuries ago. As a result of the cowardice, inaction, and incompetence displayed by the denizens of Vitharn, their ghosts were cursed by Sheogorath to relive their final moments in perpetuity.

During the attack, Anglor followed Hloval Dreth's orders and headed to the small chapel in the northwestern part of Vitharn Keep, where he started praying for the few revelers seated on the pews. Apparently he kept praying even when the Fanatics broke through the defenses and met his demise on the podium. During the related quest, it's your task to lift the curse from Anglor and his fellow citizens.

He wears a simple black robe and is armed with a leveled dagger.

You will encounter his ghost in the chapel, standing on the podium with his arms spread out, silently preaching for two equally doomed citizens. If you approach him, he will tell you what he's doing there: "Prior Dreth has tasked me to pray for Vitharn's safety." If you ask him about the siege he will give you a bit of information about how Hloval Dreth attempted to negotiate with the vassals: "Prior Dreth met with the Fanatics to turn them away. They did not see the wisdom of his words. Instead, they sent soldiers to sneak into the keep. The defenders in the bailey failed to stop them from opening the main gates." If you have spoken with Hloval on the battlefield beforehand, Anglor will tell you how he once sacrificed his own Magicka to help: "It was an honor for me to help Prior Dreth. The pain of the stab wound was a small sacrifice to restore his magicka." However, after you have taken the Dagger of Depletion from the nearby chamber, Anglor will say: "You should return what you have stolen." After the conversation he will shout: "For Vitharn!" and once again turn his attention to the doomed citizens.