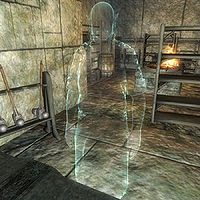 Bat gro-Orkul is an Orc smith and resident of the ruined city of Vitharn, which was overrun by its own brethren centuries ago. As a result of the cowardice, inaction, and incompetence displayed by the denizens of Vitharn, their ghosts were cursed by Sheogorath to relive their final moments in perpetuity.

He wears a blacksmith's apron and rough leather shoes. He also carries the key to the armory.

As good a smith as he might have been, he took his job way too seriously and was so cautious with his weapons that he didn't dare lend them to Vitharn's defenders, not even during the attack. His manic perfectionism especially victimized the archer Althel, who was put in charge of guarding the operating-wheel to the front gate. She failed miserably because Bat wouldn't provide her with any arrows, making it easy for the invaders to turn the wheel and letting the rest of their forces in. This incident gives Bat a major complicity in the fall of Vitharn and during the related quest you'll have to retrieve the arrows from his armory and deliver them to Althel, so she can defend herself against the attackers.

You will locate Bat's ghost standing behind the desk in the armory, in the same spot where he met his demise when the brethren finally broke through the defense line. In case anybody unlocks the door to the armory, he will leave his spot for a brief second and lock the door. If he detects you trying to sneak into his armory he will cast a spell on you to teleport you out.

When you approach him for the first time he will introduce himself and appear to be helpful: "I am Bat gro-Orkul, warden of the armory. If you need weapons or armor, I've got them." Or "I'm keeping Vitharn's weapons and armor safe from thieves and miscreants." But if you ask him about the siege, you'll soon realize how Althel must have felt: "The Fanatics are about to break into the courtyard. It's a good thing I've kept all the weapons and armor in good condition. If I let those soldiers use them, they'd be all dented by now." If you get anywhere near the tightly locked door to the armory, he will say: "You there. I'm watching you. Not so close to the armory door." When you have spoken to Althel in the battlefield, you can ask Bat for the arrows: "I can't give you any arrows because then the armory would be empty. Then what would I do if someone needed some arrows? I wouldn't have any, that's what. So these arrows are staying right here in case someone needs them." When you walk away from him empty-handed he will just mumble to himself: "Everyone wants my weapons. But they're my weapons. Mine!" Interestingly, asking Bat about the arrows with a disposition above 80 will make him say: "So what you're saying is you really, really need these arrows? Go ahead. Take them. What would I want them for?" but he will not give them to you and he will still kick you out of the armory.

Out on the battlefield, where the defenders are cursed to relive their deaths over and over again, Bat is naturally a victim of much hatred. Especially Althel is furious and will, in the midst of her usual counting, tell you that "1, 2, 3. That idiot Bat gro-Orkul refused to equip some of us. 5, 8, 13. He has arrows, but won't give me any of them. 21, 34, 55." Another defender affected by Bat's hopeless ways of running his armory, the treacherous mage Hloval Dreth, will not be much nicer, and will not hesitate to include Bat on one of his special lists; "It's that fool Bat gro-Orkul. He thinks his armory is more important than the town or our lives. He's first on the list. Oh, yes! First." The third soldier in the defense line, Desideratus Annius, will be a bit more forgiving: "Bat loves his arrows. They aren't Althel's, they're his. Bat would be betrothed to his arrows if he could." Last words comes from the unnamed soldier near the southern gate: "Bat gro-Orkul is so stingy with the armory. He should dance today. He may cost us our town today. Then we'll see who dances!"

A small graveyard stands in a corner of the Vitharn Bailey, and Bat's inscription reads: Bat gro-Urkul [sic] was a miser. Upon his head lies a measure of the blame for Vitharn's fall.