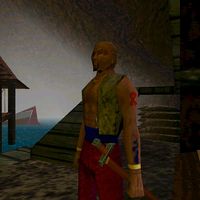 Vander at the League hideout 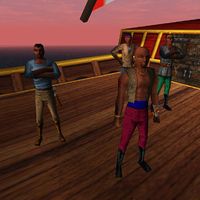 Vander during the attack on Brennan's ship

Vander is a member of the Restless League, and can be found in their hideout. He is the right-hand man of Basil and was responsible for the attack on Brennan's ship just before Cyrus arrived on Stros M'Kai. During the attack, he stands with three other League pirates on his ship off in the distance.

You will have to fight him during your conversation with Basil, at the end of the topic "Part of You". He cannot be talked to until you defeat him in combat.

Restless League
As Cyrus leaves the League hideout, Vander says to Basil that he may be their only hope in finding Iszara and the soul gem.

Iszara Restored
Vander is present while Cyrus and Basil discuss the soul gem at the hideout. He is upset that Richton now has the soul gem, and doesn't think Cyrus has what it takes to defeat the dragon guarding it.

Sword of Crown
He appears alongside other League members during their infiltration of Stros M'Kai, though he does not seem to be in the Temple of Arkay.

First time, if you are injured:

"You are wounded. Take this bandage."
(Receive bandage)
Thank you.
"For your good will. And my spared life."

"Come to boast of your triumph?"
"Let's end it. For my sister's sake?"
"And what of my men? What of their sake?"
"Those men gave me no choice."
"We were attacking that ship for its known Imperial allegiance, which--"
"That's your war and I'll not be drawn in."
"Even if you add to its casualties."
"You're still standing.... Forget it, then."
"Cyrus. I... want to find Iszara, too."

Two idle lines that were intended to be used after the fight, if your weapon was sheathed: