Though this adorable fawn's kin shimmer with hues different than its own, the first color ever seen was the pearly white glow on this one. Give it enough care and you can help it overcome its shyness, allowing it to cavort at your side.

Vale Fawn is available in the Crown Store for 00000

This imp, after being caged by Vampires, freed itself and can now join you in your journeys. Easily spooked, it often changes into a Vampiric Dragon form, hoping to seem fiercer than it is. 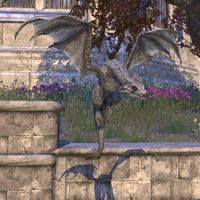 The Vampiric Dragon Imp is a pet that was included in the free Player Appreciation Bundle. It is actually a red Illusion Imp, but most of the time it will magically disguise itself as a tiny vampiric dragon. Its default name is "Needletooth".

A Haj Mota is an ambush predator, waiting patiently in concealment until its prey should come into attack range. The Vedigris breed tends to hide in algae-covered pools where its color acts as camoflage. 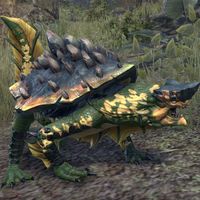 The Vedigris Haj Mota Hatchling pet is available for free upon entering Lilmoth in the Murkmire DLC for the first time. Its default name is "Burrower".

A reptilian pal from Morrowind, where they're known for quickness, devotion, and a mildly offensive odor. 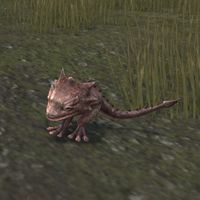 Vermilion Scuttler pets were given to players with the Explorer's Pack pre-order bonus. Its default name is "Warty". The item was originally called "Pet Scuttler".

A mage from Lilmoth found a way to, ahem, 'tame' these green slimes. Yes, it will follow you around, leaving a disgusting trail of slime, but it's hardly docile. My apprentice's so-called 'pet' woke me by trying to engulf my face.—Aleri Andalor 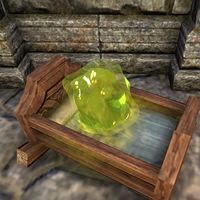 Acquired by finding and using seven Voriplasm Trap Parts, which can be found in Murkmire Strongboxes during the Murkmire Celebration. Its default name is "Gibblegog".

The Common, or Demotic Vvardvark has become, in just a few years, an everyday sight on the island of Vvardenfell. But where did they come FROM? Popular opinion points the finger at the wizards of House Telvanni—but they get blamed for everything. 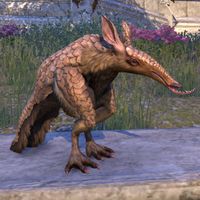 Vvardvarks were available from the Crown Store for 00700700

. They can currently be found in Psijic Vault Crates as a Superior-level reward. Its default name is "Lickspittle".