I found the journal of Graccus, an Imperial who destroyed a Bosmer village to find a treasure buried below.

In the mansion of the Vile Manse, there is a book on the desk in the study upstairs titled "Graccus' Journal, Volume II". When activating the book, it will say the following:

<This book appears to be the journal of Graccus, the Imperial owner of the Manse. It rests open on the most recent entries.>
<Read the first marked entry.>
"After years of searching, enduring a maddening hunt, I've found it. The treasure beyond all gold is buried somewhere beneath this Bosmer town."
"I will clear the village away—and the villagers will make ideal diggers."
<Read the last entry.>
"Wouldn't have found the path to the treasure were it not for the tome."
"He must have left it. Wants me to find the treasure. I won't disappoint him. I left the tome in the cellar to remind me of my task."
I should look for this tome in the cellar. It might lead to the treasure Graccus wrote of.

This will cause you to accept the quest, and direct you to look for the key to the Cellar, which is hidden in one of the adjacent rooms. The key's hiding place is in a pair of boots in the master bedroom. Head back to the cellar latch, located in the northernmost point of the house. 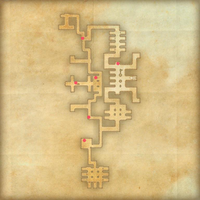 Location of the Tome

Next, you'll need to find the tome. You are not given a direct location for the tome— instead, you are told that it is somewhere within the cellar's first floor. There are multiple places you can find the tome, but the closest is directly north in the room you entered in. Once you grab the book, the voice of Hermaeus Mora echoes within your mind.

Hermaeus Mora: "So another of you comes seeking Hermaeus Mora, and that is me. Perhaps you will prove greater than Graccus. He holds the Oghma Infinium, where lies the beginning of knowledge. Yours if you slay him. Find the descent to the caves below. He is there."

Directly west of the cellar entrance, on the other side of the cellar is a deep hole in the stonework, held open by support beams criss-crossing the length of it and surrounded by platforms. To find Graccus and the Oghma Infinium, you will have to quite literally take a dive.

After a long fall, you will fall into water; get onto land, and Hermaeus Mora once again speaks:

"Down the tunnels, in the ruins of the swallowed city: that is where you will find Graccus, and the Oghma Infinium. Prove yourself his better, and take it. He was once a promising subject, but he will never be an Ageless One. Perhaps you will."

Once on land, you can make a quick detour to collect the Skyshard if needed. If you go westward, pass the enemies right before the narrow path, and either defeat or avoid the elite enemy Xevat-Golok, you can go through a passage in the stone to collect it. Take the narrow passage to the south of the cavern until you reach the main chamber. Make sure to use the map, as there is a loop in the tunnels that may otherwise have you running in circles. The quickest path up is to keep going right at every fork, though the first right turn is partly obscured. 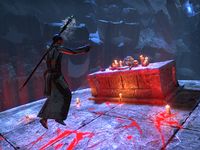 As you fight him, Hermaeus Mora will consistently stun the both of you with his mind-probing statements, black tendrils emerging from the ground as the screen shakes. Graccus' replies seem to be random

Once Graccus is defeated, read the book. As you do so, you will again get stunned as a mass of black tendrils emerge from the book. Hermaeus Mora will then appear, and will need to be talked to for your reward.

"And so the Infinium becomes mine again. As it always does.
You performed well against Graccus."
Where is the Oghma Infinium?
"Safely returned to its home in Apocrypha. I would not risk you against its secrets.
But I will not leave you empty-handed."

He rewards you with leveled gold and the Discourse Amaranthine memento.