I've arrived at the city of Dune to find it under siege by Daedra and the forces of Javad Tharn.

Javad Tharn has grown tired of waiting. There have been reports of Daedra and Stonefire cultists in Dune. You need to clear the city of Daedra, then meet Ayrenn at the temple.

First, you need to find the Champion in Dune. Shazah or Khali rescued Esan from the Mages Guild. He has a plan. When he saw the Daedra, he stole a fang talisman from the temple's vault. You can focus its power and close the Daedric portals. However, you need to power the Fang by holding it when you fight atronachs.

To charge the fang, defeat five atronachs inside Dune, then use the Sacred Khajiit Fang on the portal in the center of the city.

The Lunar Champion says Esan left to investigate a second Daedric portal near the Mages Guild. She sends you after him while she reports to the Thalmor council and gathers troops for you.

The Mages Guild is to the northeast. Esan is lying on the ground in front of the guild. The leaders of the guild turned on him. They must be working for Tharn. You need to kill Bayya, who has trapped the mages inside the guild, and destroy her totem.

Bayya is in the upper level of the inn Walker's Stay. Defeat her, destroy the totem and close the portal.

The Shrines of Jone and JodeEdit 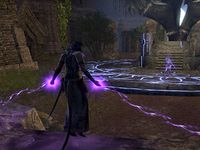 Shazah is bound by Javad Tharn

However, when you return to the Lunar Champion, Javad Tharn opens a dark anchor. He plans to walk the Path of Two-Moons himself. After you defeat the harvester, the Lunar Champion will thank you for saving her life.

As you run with the Lunar Champion to the Temple of the Dance, the people of Dune, the Vinedusk Rangers and even Queen Ayrenn will cheer and congratulate you on saving Dune.

This Elder Scrolls Online-related article is a stub. You can help by expanding it.
Retrieved from "https://en.uesp.net/w/index.php?title=Online:The_Fires_of_Dune&oldid=2294328"
Last edited on 5 January 2021, at 15:34