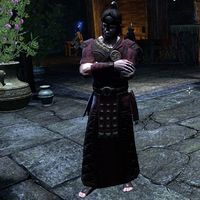 Surgeon Andronicus is an Imperial doctor who can be found at each Alliance base in the Imperial City Sewers.

When spoken to, he will bring to light the situation in the Imperial Prison.

"I don't care who's in charge here—you must listen! The Imperial Prison has descended into carnage. Everything else is a distraction!"
Calm down. Tell me what's going on.
"I'm … I was in the Legion. When the city fell, I remained to do what I could.
I recently cared for three people—former prisoners who escaped from the Imperial Prison. How they managed, I cannot fathom."
What do you mean?
"Their souls were … stitched together. Pain felt by one echoed through the others. Each had a dozen broken bones, so every step was a shared nightmare.
I don't know what the Daedra plan, but the Imperial Prison must be the heart of it."
How do I get to the Imperial Prison?
"I heard there's a way through the Memorial District, but the place is crawling with Daedra. I don't know of another way.
If you go there, do not allow yourself to be captured."

After you have completed the dungeon, you can tell him about it.

"It's no use. None of you people will listen. Whatever the Daedra plot, the Imperial Prison is key."
Not anymore. I put an end to that.
"Truly? What happened? What did you find?"
Nothing pleasant. But it's over now.
"Then I finally know which alliance can get things done.
I'll speak with your superiors. See if I can help with your wounded. Make myself useful."