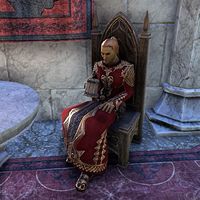 Sapiarch Tandemen is an Altmer and the Sapiarch of Foreign Observations who can be found in Alinor. Prior to completion of the quest Culture Clash you'll find him sitting at one of the tables outside the Alinor Bank and Trust enjoying his drink and people watching.

Before the related quest:

"Oh my! You're one of the newcomers! I wish I had time to chat, but there's so much to do, so much to do.
Find me later, though. I'd love to ask you questions about who you are and where you came from."

Once Courtier Vindilween sends you to do a favor for Sapiarch Tandemen, he'll be much more talkative:

"I hope you aren't here about anything important. My schedule is completely full. I couldn't possibly squeeze you in before the Mid Year Mudcrab Festival."
I need you to write a recommendation for Rigurt, the Nord ambassador.
"A recommendation? I'll have you know that I don't just throw those together in a slap dash fashion. A recommendation must be researched and carefully considered. I can't be too cautious when it comes to endorsing new arrivals."
Courtier Vindilween sent us. She suggested you might require a favor.
"Vindilween? Why didn't you say so?
If you can acquire items of cultural significance from the newcomers—say, something from a Khajiit, a Breton, and an Argonian—I might be persuaded to write a recommendation for Ambassador Rigurt."
I suppose you have a particular Khajiit Breton, and Argonian in mind?
"As a matter of fact, I do.
The Khajiit's name is Urjurra. Exotic, don't you think? Henri Ondare is the Breton, and the Argonian calls herself Grayscale. Bring me something that belongs to them and reflects their cultures and then we can talk."

If you speak to him again before leaving, he'll add:

"Something else? We can discuss the letter of recommendation for Ambassador Rigurt after you have acquired the mementos of cultural significance from the newcomers Urjurra, Ondare, and Grayscale.
I shall await your quick return."
What's your interest in the cultural items you requested?
"I'm not only the Sapiarch of Foreign Observations. I'm also the foremost collector of artifacts from the lesser races. Thanks to the Queen's decree, I'm finally getting an opportunity to meet these interesting creatures and add to my collection."

Once you've collected the cultural items and spoken to Rigurt, Rigurt will address the Sapiarch:

Rigurt the Brash: "Friend Sapiarch! Here are the cultural items you asked for, along with a gift from Rigurt— a Nord Night Favor!"
Sapiarch Tandemen: "That's everything I wanted, plus an arousing example of Nord erotica. Thank you!
Here's the official letter of recommendation! you requested."

At this point, you can engage in conversation with him one last time:

"I appreciate your help in acquiring cultural mementos from the newcomers. I hope my letter of recommendation provides Ambassador Rigurt with the opportunity to meet the Proxy Queen.
She really is an interesting woman."
Anything Rigurt should know before he meets with the Proxy Queen?
"Tell the ambassador to be on his best behavior. The Proxy Queen is a stickler for etiquette and protocol.
Thanks again for these items. Each reflects the culture that created it. And the Nord gift. I suppose I'll find a use for that. Eventually."

If you leave the area and then return, you will find that Sapiarch Tandemen will have been removed from the game.