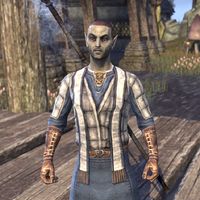 Renus Falvani is a Dunmer mage found initially in Mournhold. Regardless of quest choice in By Invitation Only, they can also later be found at the academy of Shad Astula.

Ice Arrow
A basic ranged attack that does minor frost damage.
Summon Ice Barrier
The enemy summons an Ice Barrier that absorbs projectiles fired at it until destroyed. The player should move so that there is a clear line of sight between themselves and the enemy.
Winter's Reach
The enemy releases an icy whirlwind in the direction it is facing. This whirlwind does moderate frost damage and roots all players that it hits. Root effect passes through block, and can be escaped by roll dodging.

"Just wait till I get over to that school and show them what I'm made of. They'll be amazed!
What're you looking at, s'wit?"
Someone I could snap with one hand tied behind my back.

"Think so? Come on. No one's that eager to get humiliated.
Do you have any idea who you're dealing with?"

At this point you can fight or intimidate him. If you do not have the Intimidating Presence perk, you'll be forced to fight him:

Someone I'm challenging to a fight. Winner gets to keep your invitation.

"All right, loudmouth. Let's get this over with."

(Intimidate) Someone I'm about to rip apart. I haven't killed anyone in almost an hour.

Think so? Give me your invitation or you'll find out.

"Hold on! Wait!
Take the damned thing. It's not worth fighting over. I'll... I'll enroll again next season."

Defeat him in battle, and he'll say:

Renus Falvani "I yield! Take the invitation and leave me alone."

At the academy, he will speak as if his invitation was taken regardless of whether or not you take his or not:

"I can't believe I lost that fight! I was cheated out of my invitation!
Ah, it doesn't matter. My family's gold secured me a new one, and here I am."