This article is about the Breton in Sanguine Barrows. For the overseer in the Underground Sepulcher, see Marisette Guillon. 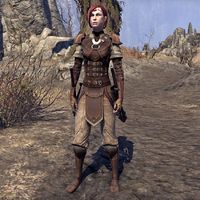 Marisette is a Breton member of the Ring of Daggers and part of the team tracking down Gerard Althen, King Ranser's former spymaster.

Crimes of the PastEdit

She can be found on the road near the Online:Sanguine Barrows, her greeting to you will depend on whether you previously were involved with Vanus Galerion's plan to stop the Planemeld.

"Because that's the scenario here. I've tracked down a man named Gerard Althen.
Althen ordered the massacre of hundreds of innocent people during Ranser's War and then vanished. After ten years, I finally found him. I just need help bringing him in."
What kind of help do you need?
"I need someone to fight their way into the barrows and find his hiding place.
It shouldn't be too hard. One of Althen's old cronies came to help him escape. Trolls got to him, but he must've been carrying a clue to Althen's hiding place."
All right. I'll go see what I can find.
"You're smart. Working for the Ring of Daggers has two great benefits.
First, we reward our friends generously. Second, we don't worry about trials and laws and silly things like that. Get Althen to Hoarfrost Downs and he will pay for what he did."
Can I ask you about something?
"You certainly can. I may or may not be obliged to answer, but you can certainly ask."
What exactly were Althen's crimes?

"Althen was King Ranser's spymaster and head of security.
During the war, when High King Emeric struck an alliance with the Orcs, Ranser went mad. He had Althen round up hundreds of innocent Orc civilians and put them to the sword."
So he was acting on King Ranser's orders?
"Of course, but that makes him no less guilty. The dog that bites cannot blame his master for letting him off the chain.
Althen willfully organized the slaughter of innocent people, and he will pay for that crime no matter how long it takes."

How will he be punished?

"If you must know, he will die. And most likely, it will be a slow and painful death.
The contract is with High King Emeric. He hired us to track Althen down. We can bring him in dead or alive. It's our choice."
Why would you choose to kill him?
"In addition to his crimes, Althen made the mistake of crossing the Ring of Daggers.
He tortured and killed the lover of our leader, Copper Dariah. All that remained of that man was an eye. I suspect Copper will begin with one of Althen's eyes."

Can you tell me more about the Ring of Daggers?

"We work on a contractual basis. Guards, soldiers, scouts, couriers. Whatever the client needs, we provide.
We swear allegiance to no one, but work for a variety of interests within the Daggerfall Covenant—often even for the High King himself."
So you're mercenaries?
"No, it's not that simple. You can't hire the Ring of Daggers to fight in some silly war or a military campaign.
We take contracts for specific tasks which require a few agents. And we maintain our own chain of command."

When you are finished speaking to her, she will run off and say:

Marisette: "I'll be having a drink at the Dusklight Inn in Hoarfrost Downs. I'll wait for you there."

If you decide to hand Althen over to the Ring of Daggers, she'll greet you with:

"You followed through? Excellent. I worried he'd convince you to set him free, then we'd have had to track down both of you. That would have been unpleasant.
Forget that, though. Can't tell you how glad I am to finally have this bastard in custody."
He's all yours.
"You've earned my esteem, my friend, and that's no small thing. You're a friend to the Ring of Daggers now.
I have a feeling we'll cross paths again someday. May the gods watch over you until then."

She'll then turn to Althen:

Marisette: "Heard you'd been trying to make amends, old man. You know what I think?"
Marisette: "The only redemption for a murderous bastard like you is a slow, painful death, and we're going to give it to you!"
Marisette: "Get up! You can rot in the stockade for a little while first."
Marisette: "Lock him up. Make sure to spit in his face every hour, too."
Thoogh gro-Murtag: "With pleasure. Heh."

If you choose to let Althen go free, Marisette and the Ring of Daggers will be absent from Hoarfrost Downs.

During the Covenant version of Messages Across Tamriel, Marisette can be found alongside her colleague Copper Dariah when you have to report to the latter. If you talk to her, she will say "You'll want to talk to Copper, not me. My word has a hefty price."

After speaking with Copper Dariah, she and Marisette discuss their wagers while you wait for Vanus Galerion to arrive.

This Elder Scrolls Online-related article is a stub. You can help by expanding it.
Retrieved from "https://en.uesp.net/w/index.php?title=Online:Marisette&oldid=2376341"
Last edited on 28 March 2021, at 02:55