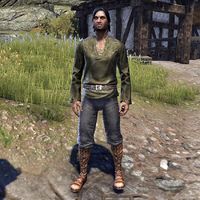 Lucas Oscent is a recently missing Breton from the town of Koeglin. Once he is rescued, he'll be found standing outside the family home with his parents, Bertran Oscent and Margot Oscent.

After Margot asks you to look for her little boy, Lucas can be found tied up in one of the tents to the south of the village. When you talk with him, he will be annoyed at your sudden appearance.

"Gods strike you! Couldn't you have just waited five more minutes?
The slavers outside the tent were talking about where their base of operations is … then they got interrupted. I'm guessing they saw you.
My mom sent you, didn't she?"
You're Margot's "little boy"?
"Exactly. My mother's a little … overprotective. She still tries to tuck me into bed at night. It's embarrassing.
And now she's messed up the whole plan! I actually came here to spy on the slavers!"

What were you hoping to learn?

"Anything and everything. With Constable Pascal acting strange, Deputy Luric and I took the initiative.
I may not have heard where their base of operations is, but there are plans for some other attack floating around the camp."

You look more like a captive than a spy.
"Thanks for rubbing it in. So the plan wasn't going perfectly … but I was adapting.
I didn't hear where their base of operations is, but I did see plans for some attack floating around the camp. I had hoped to take those back to Deputy Luric."

Once freed, he will jump up and thank you before running out of the tent:

Luca Oscent: "Get those plans back as fast you can! May the Eight protect you!"

When you arrive back at the village, Lucas will have reunited with his parents. If you speak with him, he will suggest you talk to his mother first:

"As embarassing [sic] as my mother may be, it breaks my heart that she worries so much.
It's good that we've put her mind at ease. You should talk to her."

After you speak with Margot, he will explain some of the reasons why he puts up with his mother's smothering:

"The lengths I go to for a free breakfast of biscuits and jam.
My mother can be a hassle sometimes, but it's a small price to pay to have someone else wash your smallclothes."