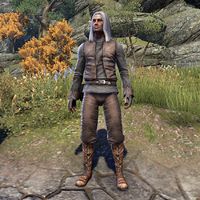 Bertran Oscent is a Breton found in Koeglin Village, outside his home. His wife is Margot Oscent and they have a son called Lucas.

If spoken with before starting the search for his son, he is unsurprised that he may be in trouble.

"So Lucas just up and wandered off again? Boy's head is as thick as stone. If he went and got himself captured by those slavers ….
I hate to say it, but I told him so."

If you agree to help his wife, Margot Oscent, he'll comment:

"Lucas. Lucas. Lucas. That's all she talks about.
Margot's worried sick about the boy. At this point, you'd think she'd have gotten over it."

After Lucas is rescued, he and his mother will be found standing with Bertran outside their home. If you talk with Bertran first, he has a gloomy predication of future conversations:

"Here we go again. I'll be hearing about this for years—how I failed to save our son in his darkest hour, and oh, thank the Eight for that stranger ….
I guess it could be worse."

Once you have spoken with Margot and received a reward, Bertran will sum up his feelings:

"The boy's home and she's happy. Back to spoiling the poor kid.
Maybe I can sneak away for a drink soon."