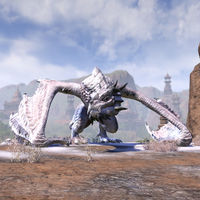 Lokkestiiz is a frost dragon residing in the Sunspire, masquerading as an aspect of Jone. Lokkestiiz is known for his freezing breath.

Lokkestiiz lands back on the platform after the group wipes

When you arrive in his roost, and idle in front of him, Lokkestiiz will taunt you:

Shatter
The Frozen Tomb shatters if a player does not stand in it, causing massive damage to the entire group.
Frostbolt
Lokkestiiz fires ice at people.
Frigid Cold
Lokkestiiz has an aura of cold energy around him. When you are close to him, it causes damage.
Frost Breath
Lokkestiiz breathes a blast of frost, indicated by a massive conal AoE.
Storm Fury
Lokkestiiz fires off a beam of lightning during flight.
Wing Thrash
Lokkestiiz hits you with his wing if you're too close.

The damage dealers need to stand in the nook between Lokkestiiz's left wing (your right) and his head without entering his frosty aura. This way, he can't use Wing Thrash and instantly kill anyone. The tank should stand on the opposite side of Lokkestiiz's neck from the damage dealers and hold his attention until he flies up.

Frozen Tombs appear behind the group every now and then need exact time. There are three locations they can spawn in, and they spawn in the same order every time. One of the dps needs to run in and enter the circle while one of your healers heals them. If nobody claims the circle, the tombs will begin firing off damage at the rest of the group. This mechanic can be ignored on Normal.

If Lokkestiiz stops mid-air and targets you, you need to block so you don't get knocked back and take a lot of damage. Avoid his lightning breath, which he occasionally fires off as he's flying overhead. At the end of his flight phase, he'll stop at one end of the arena, fly down low, and fire a beam of lightning out of his mouth, sweeping across the arena to reach the whole party. When he does this, everyone needs to block so they don't die.