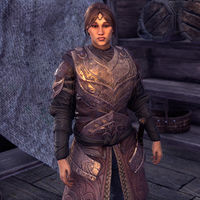 Kasalla is a Redguard who has been smuggling goods to Solitude from Sentinel. She stores the goods in her warehouse on the Western Skyrim Docks.

After investigating some leads in Solitude, you will learn Kasalla has had a new shipment come in this is the opportunity to see what it is. After breaking into the warehouse, you and Lyris will find funerary urns, bones and ashes and some Reachmen fetishes in the marked crates.

Kasalla: "I knew whoever was poking through our shipments would return. Brought muscle this time, I see."
<Everyone unsheathes their weapons.>
Lyris Titanborn: "More than you. Care to try me?"
Kasalla: "I'll pass. I just want to know who's been meddling in my business."

With the chance of not have the warehouse become a bloodbath, you can question Kasalla about the contraband and who the buyer is.

"I had a feeling it wasn't just an opportunistic thief trying to steal my cargo. What are you after?"
Proof of a plot against the high king. Care to explain what's in these crates?
"A plot against the high king? Involving plundered antiquities from Hammerfell? Preposterous! I'm simply facilitating a transaction between treasure hunters and a rich collector.
So, who am I paying the bribe to? You or the high king?"
What about these Reach fetishes?
"Give me that. Tribal crafts, my arse! I told that son of a skeever I don't deal in arcane goods. Especially ones from the Reach! Nothing but sorrow comes from such business.
This isn't cursed, is it?"
Who hired you to smuggle this?
"No name, just instructions and gold. Shipments come in, I make sure no one looks too closely, and wait for a pick up. Never see the same face twice. Last time it was a smooth-talking Breton with Nord laborers in tow. You want more, I need assurances."
I'm sure we can work something out.
"They're taking the cargo to an abandoned lodge in the foothills north of Solitude. Occasionally used it myself when the city guard was being thorough. Want to catch them? Start there.
If that's all, we're leaving. I'm not losing my head over this."

After making a deal and getting a location, you can continue to press for details.

Can you tell me anything else about the Breton and the laborers?
"The Breton was sly. Handsome even. Thought he could charm me into taking on additional shipments. Now that I know what's involved, the trouble isn't worth it.
The Nords were locals. Hired hands from the Lonely Troll."
You never check your cargo?
"I'm paid not to ask too many questions. This arrangement was a lucrative one. I trusted them, but it seems they took advantage of my natural greed.
That won't happen again."

Once you have made a plan of attack with Lyris, she will then leave the warehouse, but not before a parting shot at Kasalla:

Lyris Titanborn: "Give your sentry my best and tell him I owe him an autograph."
Kasalla: "Oh, he's going to get more than an autograph if I see him again."