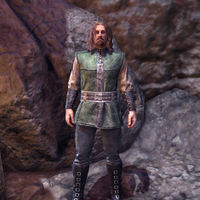 Hamvir is a Nord healer from Dragon Bridge who can be found outside of Chillwind Depths. While he and siblings were collecting herbs, his sister was attacked by a chaurus and is grievously sick. Hamvir is looking for someone who can escort him through the cavern so he can collect ingredients to create a cure.

When he is approached he will say, "The Chillwind Depths, they aren't safe, traveler." You can then ask him why it's dangerous.

"Oh, traveler, you must turn back! Chillwind Depths, it's crawling with giant insects!
I need to go inside and gather ingredients to heal my sister, but the things in there … they keep chasing me out!"
What's wrong with your sister?
"I'm a humble healer from Dragon Bridge. My family—my brother, my sister, and I—we came to gather plants and other medicinal ingredients.
Hedrynne wandered too close to this cave. That's when the chaurus attacked her."
A chaurus?
"One of the giant insects I told you about.
My brother needs to stay by Hedrynne's side, so I'm trying to enter the cave. If I can gather a few special ingredients, I can make an elixir to heal my sister. Could you … would you … help me?"
I'll help you gather the ingredients you need to save your sister.
"Oh, thank you! I wasn't able to take three steps into the cave before something attacked me. I'm a healer, and not very good in a battle.
We need to find a chillwind mushroom, deep lichen, and an unfertilized chaurus egg. Then I can heal my sister."

After you agree to help, you can ask questions.

Tell me more about the ingredients you need.

"Chillwind mushrooms can only be found in this cave. The bugs eat them and the deep lichen that grows on the walls. Well, when they aren't munching on people.
Mixed with an unfertilized chaurus egg, they create a powerful antidote to chaurus poison."

What else can you tell me about Chillwind Depths?

"The cave system consists of winding caverns. There's a lot of wildlife down there. Some of it is the usual things you'd expect to find underground. Some of it, like the giant insects, is more exotic.
It's dangerous, but we need those ingredients."

Tell me about your sister.

"Hedrynne's as sweet as honeysuckle but tough as steel. Everybody loves her. She's younger than me, and I've been training her in the healing arts.
If I can't make the elixir in time—no, I can't think like that. We'll save her. We have to."

Hamvir will meet you inside once you enter the cave. If you speak with Hamvir while escorting him, he will remind you of what you're searching for.

"Remember, we're looking for a chillwind mushroom, deep lichen, and an unfertilized chaurus egg.
Be on your guard. More dwells in the depths than just giant insects!"

When you arrive at the camp where you can find a chillwind mushroom, he will remark:

Hamvir: "A camp? Could the stories about underground humanoids be true?"

Collecting the mushroom, Hamvir will examine it:

Hamvir: "A chillwind mushroom! And a fine specimen at that! Good work!"

After collecting the mushroom, and interacting with him once more before finding the next ingredient:

"The mushroom plays an important role in the chaurus's diet. With it, we're one step closer to creating an antidote for my sister. Let's keep looking."

After collecting the lichen, he'll say:

"A pen? Do these underground humanoids keep the chaurus like cattle? Let's keep going."

Approaching the chamber of Mother Krkktkk:

Hamvir: "I never would have gotten this far without your help. Let's be careful and find the rest of what I need."

After grabbing the unfertilized chaurus egg:

Hamvir: "I probably should have mentioned this earlier, but the only thing that makes me more nervous than giant bugs is dark, enclosed spaces!"

When you have all the ingredients, Hamvir will ask you to meet him outside:

Hamvir: "That's everything! Meet me outside. And bring those ingredients so I can prepare the elixir."

Once outside you can hand the ingredients over.

"Quickly, traveler! Give me the ingredients so I can make the elixir for my sister!"
Here are the ingredients we gathered from the cave.
"A chillwind mushroom, a patch of deep lichen, and an unfertilized chaurus egg … perfect! With these, it's only a matter of time before Hedrynne is as good as new. Thank you!
Please, accept this humble gift along with my gratitude."

You will get a pair of gloves and gold.

Talking to him afterwards.

"You have done a great service for my family, traveler. Now my sister has a chance. I'll craft the curative and administer it to her as soon as possible.
Thank you again."
I only hope it's not too late to save your sister.
"Mara and Kyne willing, my elixir will work and she'll be on her feet in no time.
I couldn't have done it without you, traveler."