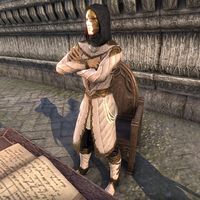 Grand Maestro Forte is an Altmer and current leader of the House of Reveries in Rellenthil.

He won't be present in the game until near the end of the Manor of Masques quest, at which point you can find him at the amphitheater surveying the new talent hoping to join the troupe.

After the completion of the quest, you'll find him in the reading room of the Manor of Masques, seated by the window reading a book.

The Grand Maestro will say the following during the final auditions:

If you choose to let Rinyde unmask the hopefuls, he'll only say:

"To think that mage would taint our sacred stage with such an act. Why, I've never seen such an outrageous display of disrespect!"

If you choose to let Rinyde unmask you, he'll say:

"How fortunate, that you were the only one caught in that mage's spell. I suspect there's more to this tale than meets the eye."

After the quest, you can speak to him freely:

"I'm surprised you've returned after what transpired.
Yes, I know all about your little production. Luckily for you, Alchemy has vouched for your goodwill. It is by her wish alone that I welcome you to the Manor of Masques."

Tell me about yourself.

What are your duties?

"I select new members, as you may well remember from your time as a Hopeful. I also have the authority to expel a member, should they go against our rules."
"Other than that, my position is one of guidance."

Who do you guide?

"Why, everyone.
There are many voices within my troupe, all passionate, but not always cohesive. I simply lend my ear and give wisdom when needed. A voice of logic when many are led by their hearts. That is all."

After completing The Ebon Sanctum, you'll also be able to talk to him about Ebon Stadmont:

I don't know if you remember, but we actually met in Ebon Stadmont.

"How did you know that?
Why, yes, I did. I wished to study the language within the forest. I thought it would help me discover new stories to share. But all it led to was tragedy."

"It all started with Fletch's death. I believe he was attacked by a Daedra, though I never was sure. Still, I was stubborn, and convinced my companions to stay.
It was only a few days later that we were attacked. Many died that day."

Did you give your research to the Mage's [sic] Guild?

"The Mage's [sic] Guild? Why, I'm not sure. In fact, I don't recall whatever became of my notes. I'm not even sure they made it out of the forest.
If someone has my notes, it was not my doing."

Upon helping Andewen heal Fletch and going through the doors, Maestro Forte will be inside the Ebon Sanctum garden. He does not yet have the title of "Grand Maestro" because of the time period you meet him in, and will speak to Andewen and Fletch:

You can speak to him after:

"It appears you've saved Fletch from the brink of death. It brings to mind the story of Temarian, who of course was saved by the Nereids of—.
Ah, but now is not the time for such tales. Tell me, what has happened?"

Andewen saved his life. He can't remember anything, but there are Daedra nearby.
"Daedra? I had no idea. Our watch did report some strange creatures prowling about at night, but I've heard of no other attacks.
Something must be attracting them here. Did you just come from the temple?"

Yes, that's where we found Fletch.
"The only thing of note I discovered within the temple is a glowing stone in its main chamber. I've yet to translate the stone's inscription, but it may be attracting Daedra to it.
I found a similar stone nearby. Can you help me investigate?"

I can do that for you.
"Excellent. Why don't you and your companion head to the stone? Just follow the path north. I'll escort Fletch to our camp and make sure he's seen to.
We'll meet back here afterward and share our findings."

We'll take care of it.