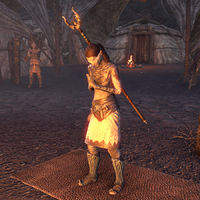 If you speak to her before starting the related quest, she says:

"Disturbing an Ashlander at prayer is unwise, outlander."

When spoken to initially, she says:

"Hmm. Your footsteps are loud as a kagouti's. What is it you want, outlander?"
"What's that? Perfume and incense? You have the stink of the Great Houses on you, oathman. What brings a House Dunmer like you to Ald'ruhn?" (If you're a Dunmer)
I've come to pay my respects, farseer.
"Have you now? Then you have my thanks … and my curiosity, also. Outsiders rarely show us such respect. When they do, it is always because they want something. What do you want, I wonder?"
Only your blessing to participate in honoring the First Ashkhans.
"Remarkable. You would honor our ancestors? Very well, I give you my blessing.
You hesitate. Shall I explain the custom? Each of the four great tribes seek a unique and worthy offering. You must place the gift at the foot of each Ashkhan's cairn."
What offering should I bring to each cairn?
"For Ahemmusa, an ashen fern. For Erabenimsun, the weapon of an exile slain by your hand. For Urshilaku, the bones of a guar returned to ash. And for Zainab, the hidden treasure of a kwama queen.
We will see how much fire you hold in your heart."
I heard you are becoming a Wise Woman?
"Yes. Though 'becoming' is a clumsy word for it. Every daughter of Veloth has worth. When we learn to speak with our water-tongue and read the truth in the stones, we also learn the truth of our hearts.
The truth is we have been wise all along."
"If you seek further guidance, or wish to know more about the significance of these offerings, you should speak with members of each tribe. Approach them with the same respect you have shown me and you will not be treated unfairly."

After exploring the tomb, you'll find Drelyth at the center of the camp along with Wise Woman Asani and Farseer Kuamta.

"Tread carefully in our camp, outlander. You may walk among us as a guest, but you are not Velothi."

Recover Calderas from the Hleran Ancestral Tomb and return to the center of the camp. After Drelyth thanks you, he turns to the gathered Ashlander leaders:

"You helped bring this fetcherfly into our home. Whatever he and his Redoran overseers do here shall be your doing as well. I pray that you choose your friends wisely."