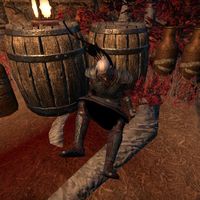 Dragonguard Orland is an Imperial found in Dov-Vahl Shrine. He is supposedly the last of the Dragonguard and holds the key to entering the Dov-Vahl sanctuary. Captain Saulinia was sent with her assassination squad to kill him.

Once you have bypassed the first trapped corridor in the shrine, you will overhear a conversation:

As you travel through the shrine's maze, you'll hear further threats:

Captain Saulinia : "Once I select a target, it always dies."
Dragonguard Orland : "I trained to fight Dragons. This isn't going to end the way you expect."

Once inside the Training Chamber, you'll meet the Captain, who has managed to injure Orland, and face her in battle. After you kill Saulinia, Orland will stagger out the nearby door:

Dragonguard Orland : "I refuse to die … near that assassin …."

When you find the Dragonguard, he will be near death:

"Damn assassin … she knew her stuff. I saw her fall, though. Thanks … for that.
After all these years … why do I suddenly have … so much company?"
Dragons have returned. Euraxia sent the assassin because she thought you knew how to stop them.
"I know … about the Dragons. I sent word … to the other sanctuaries."
Other sanctuaries? I thought you were the last of the Dragonguard.
"The last? I didn't … think so. But no one else … has responded. Maybe ….
No, I know at least … one other … is still out there. He'll come …. He has to …."
Is there really a way to stop the Dragons?
"Take my ring. It will … open the sanctuary.
Find the Dragonhorn. You have to … have to …."
Dragonguard Orland?

Oraland breathes his last and dies, but not before handing you his ring. Zamarak will then say a prayer for him.