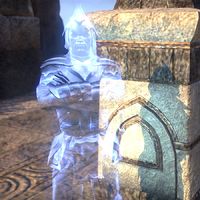 Derik Hallin is a Redguard spirit appearing after the physical trials at HoonDing's Watch are completed. In life, he was the last Ansei and died defeating the giant goblin forces of Mahgzoor Rockhand at Ojwambu, later renamed Hallin's Stand in his honor. He asks you whether you would take up the five magical Ansei swords and risk wiping out the Shehai to defeat the goblins, or fight a losing battle without them.

When you approach Derik at his shrine, a flashback of him speaking to one of his soldiers takes place:

Soldier: "The blades are forbidden! We must not use them!"
Derik Hallin: "Without them, our people—our civilization—will die."
Soldier: "Taking up those blades may lead to something far worse than death!"

Once the flashback ends, you can speak to him:

"All choices exact a toll, wayfarer. Some are trivial, but some... some linger for generations. I was forced to drink from a bitter cup in my time and all Redguards have paid the price. I wonder if you would have made the same choice."

"Giant Goblins, beasts thought conquered by Divad, have returned. The fight goes poorly. You know the location of powerful magicked blades, but they are dangerous. They were hidden for a reason.
Do you seek out the blades or fight on without them?"

"You would have met a glorious end.
We chose the blades and destroyed the beasts. But as a result, the Shehai—our spirit swords—were forever destroyed. Centuries of wondrous tradition was snuffed out. I must bear this weight always."

I take up the blades.

"I acted as you would.
We chose the blades and destroyed the beasts. But as a result, the Shehai—our spirit swords—were forever destroyed. Centuries of wondrous tradition was snuffed out. I must bear that weight always."

When you speak to him after, regardless of the choice taken:

"A single decision can define a civilization. Think hard on your legacy, wayfarer, for even small choices can have great consequences."