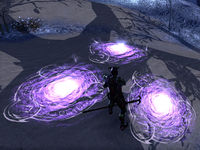 Daedric Mines summons 3 (or 5 with Daedric Minefield morph) mines in front of the caster, which will cause heavy Magic Damage and briefly immobilize enemies that trigger them. It is among the more damaging of the Sorcerer's skills, but limited by the difficulty of use. The mines do not arm for 3 seconds (unless you get the Daedric Tomb morph), and you have limited control over where they appear. It is based on the direction your character is facing. Without morphs, you get one a few meters in front of you and two closer up to either side. Daedric Tomb will allow you to choose the center-point around which the mines are placed, and also removes the arming delay, and Daedric Minefield creates a larger circle of 5 mines in front of you. The un-morphed version and Daedric Minefield may be more effective against larger groups of enemies, but Daedric Tomb can be more useful against fast-moving targets, as it is easier to hit them when you don't have the arming delay and can use it at range.

1.3.3
* Daedric Tomb: Using this ability will now cast the attack where your reticle is pointing instead of the direction you are facing.
1.5.2
* Fixed an issue with this ability where the mines could explode on larger monsters that were several meters away.
1.6.5
* Increased the damage of all ranks and morphs by approximately 30%.
2.3.5
* Daedric Tomb: This morph no longer places three Daedric mines in a line in front of you; instead, the Daedric mines can be placed at a ground-targeted reticle location up to 22 meters away. The mines will arm instantly in the normal triangular pattern.
3.2.5
* Daedric Tomb: Fixed an issue where the placement of the mines created by this morph were not aligned with your ground-based reticle.
4.0.5
* Decreased the cost of this ability and its morphs to 5400 Magicka from 6480 Magicka.