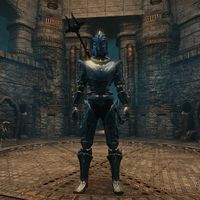 The Clockwork Criterion is a Factotum that serves as the boss of the group event at Nchuthnkarst. It is in the easternmost hall.

When Clockwork Criterion reaches 75% or 55% health, it will run to the center of the arena and place a ward around itself, rendering it invulnerable for a minute while it summons Factotum Chargers, Factotum Expurgators, Factotum Sanitizers, Beetle Fabricants, Nix-Hound Fabricants, Verminous Fabricants, Dwarven Spheres and Dwarven Spiders. This warding phase has two cyles: the first involves three dwarven spheres ambulating around the Criterion with shock AoEs laid under them. The second cycle has Firepot Spiders walking around the Criterion, spewing fire. When Clockwork Criterion reaches 25% health or lower, it starts spawning Ruined Factotums, which march from the perimeter of the arena towards the Criterion.

There is one achievement associated with this NPC:

This Elder Scrolls Online-related article is a stub. You can help by expanding it.
Retrieved from "https://en.uesp.net/w/index.php?title=Online:Clockwork_Criterion&oldid=2225652"
Last edited on 5 October 2020, at 16:55