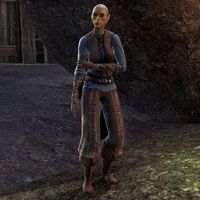 Captain Linwen is the Altmer captain of The Albatross. She is looking for missing members of her crew inside the Cave of Broken Sails. Faenir is her wife.

Engor will direct you to find his captain by the cave.

"You aren't with the Dominion, are you?"

Why do you ask?

"I'm captain of the independent sailing vessel Albatross. We found a map to an Imperial treasury that led us here, to the Cave of Broken Sails. But when we tried to claim it, our fortunes ebbed with the tides."

"We're tired of sailing independently. We planned to hand over the treasure to the Thalmor so they could make us privateers. But Brauti Bloodshark led a mutiny, captured most of my crew, and kidnapped my wife. Once he has the treasure, he'll kill them all."

I might be able to help, but I'll need to know more.

"Of course. You're the only hope I have of getting my wife back from Brauti Bloodshark. I'll tell you everything I know about the Imperial death traps inside that cave."

Why did Brauti Bloodshark kidnap your wife?
"Brauti Bloodshark thinks she can unravel the secrets of the treasure's guardians. He'll keep her alive until she's no longer useful. Or until he sees me. Said he'd kill her the moment I show my face. Bastard."
What sort of dangers can I expect in there?
"Undead guardians. The Imperials must really want to keep people away from the treasure if they resorted to necromancy. Oh, and watch the floors for traps. Fire, spike plates ... one wrong step and you'll be mutton on a spit."
How did you escape?
"I ran. Sword arm was useless, and there's no way I can rescue my crew if I'm dead. Didn't realize so few of us escaped. But you're nowhere near as banged up. If you help rescue my crew ... my wife .... Well, not all the treasure has to go to Elden Root."

That's all I need to know. I'll head inside the cave.

"All right. You can access the cave through the old mine behind me. Oh, and if you spot any of my crew, send them this way. We'll need more numbers to take out the mutineers."

Head inside and explore the cave with the help of some of the surviving crew members. Talk to Captain Linwen again after discovering the "treasure."

"You work fast. Bulag found us and told us what happened. All we had to do was follow the trail of corpses and disarmed traps. Bulag said you went after the treasure that had Brauti Bloodshark so worked up. Did you find it?"

There was never any treasure here, just a cache of Imperial war supplies.

"Let me see those papers ... "Preservation Room?" Oh, no. Brauti Bloodshark doesn't have enough mutineers to crew the Albatross. Bulag said he kept going on about needing a "skeleton crew." I think he meant a crew literally made of skeletons."

Can he do that?

"It must be why he needs my wife. The writing on the back of Faenir's map was coded, except for the phrase "Preservation Ritual." That must be it. Once she decodes the ritual, Brauti Bloodshark will turn my crew into his undead minions."

How do we stop him?

"The last we saw, Bosun Firen guarded the long hall into the great cavern. If that crafty bastard sees me approach, he'll fall back and warn Brauti Bloodshark. Then my wife dies."

What do you need me to do?

"If he hasn't already fallen to the undead, I want you to hold his attention while we slip by and free up some more of my crew. Oh, Bulag wanted to speak with you before you left. But if you just want to get moving, we'll see you inside the great cavern."

Do as she asks, then talk to her again before facing Bloodshark.

"Nice work back there. Nuttall found an old vent that led to this chamber. More climbing than I'd have liked, but we made it through. My crew is making short work of the mutineers behind us, but there are still plenty more in the cavern."

"Agreed. But we need to draw him out. Otherwise he'll order the mutineers to kill my crew. And if he sees my face, Faenir is as good as dead. We have to be smart about this."

How do we draw him out?

"With fire. There's a barrel of kindlepitch on the docks. If you burn the Imperial war supplies on the docks, everyone will be too focused on putting it out to worry about Brauti Bloodshark. When he shows his face, you can stick a blade through it."

You want me to do this on my own?

"Here, take this whistle. Give it a sharp blast and my crew will help you fight any mutineers in your path. Once they're distracted, we'll keep the mutineers off your back while you hunt Brauti Bloodshark. Good luck."
"Kindlepitch burns bright. Once you've lit the fires, go after Brauti Bloodshark while his mutineers focus on the dock.
And don't be afraid to whistle for help. Those cretins stabbed my crew in the back. We're itching to return the favor."

Defeat Bloodshark, then talk again to the Captain.

"The traitors lost their fight once you killed Brauti Bloodshark. I'd rather hang the lot of them, but Faenir said some were coerced into it. Even so, they'll need some kind of punishment."

"What we first planned to do. Once we inventory the weapons and supplies in this cave, we'll present the list to the Thalmor. If they like what they see, they'll give us our amnesty and make us part of the Queen's Own Navy."

Faenir said you were raiders.

"We were. But those days are over. I should have seen they never would be for Brauti Bloodshark. The damnable thing is he was an excellent first mate. Up until the promise of treasure warped his mind, I suppose."

What will you do with the mutineers?

"Those who planned it will hang. The rest who were forced into it? They can leave, unless my crew objects. I need to spend some time with Faenir. Before you go, find Bulag. He put something together for you. Our way of saying thanks."

"It may not be much, but Bulag scraped together a reward. We can't exactly pay you in catapults. Not if we want the Dominion to take us in. What you did for us ... we won't forget it."

Why did you call your ship the Albatross?

"Because it's the unluckiest thing I could think of. The sight of those birds terrify sailors from one end of Tamriel to the other. You'd think they were Daedric Princes with wings."

Why name your ship after an unlucky bird?

"I don't want my ship filled with superstitious fools moaning about the draugr below the waves, or cursed gold in treasure chests. I want a straight-backed crew ready to knock the draugr overboard and dispell ancient curses, so we can spend the gold."