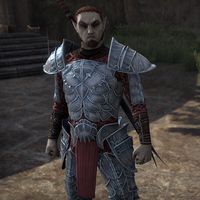 Captain Brivan is a Dark Elf soldier of House Redoran in Balmora investigating the disappearance of Veya, Councilor Eris' daughter. You can initially find him looking over the waterfront just north of the stables.

Speak to him when he's not a quest target and he'll only say "Halt!"

After being sent to him by Councilor Eris, he'll say:

"Not now, outlander. If you need some sort of assistance, go find one of the House Guard."
Councilor Eris sent me to ask about the investigation to find his daughter.
"You must be one of the freelancers the councilor employed to supplement the duties of the House Guard. Very well, I'll tell you what I know. Veya ran away. Again.
I hope you can succeed where my troops have failed. If anything happens to Veya …."
Sounds like you have a personal stake in this.
"I've known the Releth family since I was a child. Veya is like a sister to me, and I'll do everything in my power to get her home safe and sound. Even trust an outlander.
We think her friends may know where she is, but they keep eluding us."
Maybe her friends will be less suspicious if I approach them.
"Perhaps. As long as you don't get too close. They've been running notes of late. I think it has something to do with Veya, but the runners keep evading my guards.
Look for a group meeting on the other side of town and see if you can follow the note."
I'll see if I can follow the note.
"When you find Veya's friends, remember to keep your distance. You just want to spot the note carrier and follow him to whoever's receiving these messages. That's the key to locating Veya.
If you can't do it, don't worry. The House can handle it."

Tell me more about Veya Releth.
"Veya's a born warrior. Hard-headed, stubborn, a real pain in the arse. She can fight like an angry netch, though. I keep trying to get her to join the militia, but she always turns me down."

Tell me about Veya's disagreement with her father.
"That's not my tale to tell. If Councilor Eris or his wife won't speak of the troubles his family has had to deal with in recent weeks, maybe you can ask Veya—if and when you find her."

Tell me more about this note you want me to follow.
"We started to notice groups of young Dark Elves gathering in out of the way parts of the city. One of my guards saw them pass a note between them, but they split up and she lost them in the back alleys."

What do you think the note contains?
"Could be a love poem or a recipe for kwama cream cocktail, but we suspect it's the way Veya has been keeping tabs on what's been happening in the city.
Look, it may amount to nothing, but the note could give us a lead on where to find Veya."

Speaking to Brivan if the runners have escaped:

"I saw you head across the bridge towards Veya's friends.
So, how did you fare, outlander? Did you learn anything that might help us find the councilor's daughter?"
Veya's friends are trying to get a letter to someone named Drevis, but I lost them.
"Drevis? That laggard? I never understood what Veya saw in him.
I suggest you go back and try again. Just do a better job of keeping your distance and don't lose sight of the note carrier. That's our best chance of learning anything."

Of Faith and FamilyEdit

Captain Brivan: "And you're sure it's Veya? House Redoran isn't emptying its coffers so you can chase your own tails out here."
Warclaw Ferhara: "You pay the Warclaws well because the Warclaws are the best there is. We have the kitten's scent. It's just a matter of time before my warriors catch her."
Captain Brivan: "Of course, Ferhara. Just make sure she doesn't get out of the swamp. I'll take my soldiers and guard the eastern paths, in case she eludes your warriors again."
"Ah, the councilor's lackey. I understand you've made significant progress in your search for Veya. As a matter of fact, so have we.
This whole ordeal will be over soon and then you can be on your way, outlander."
Over? What makes you say that?
"My mercenaries have spotted Veya skulking about the northern portion of the swamp. Between my soldiers and Ferhara's Warclaws, the councilor's daughter will soon be home, safe and sound."
What do you know about Ulran's exile?

"Veya's brother? It's a sad story. Killed one of his own soldiers to protect an Ashlander, of all things. I think they were being too lenient when they simply exiled him, but that's how they treat the privileged few."
Veya's brother killed a Redoran soldier?
"Ulran always had an unnatural attraction to the Ashlanders and their savage ways. He felt that an Ashlander life was worth more than a Redoran life. The Council didn't agree with his assessment.
This will all be over as soon as Ferhara finds Veya."

"Khajiit mercenaries of the highest order. For members of a lesser race, Ferhara's warriors are surprisingly effective.
I employ them to bolster our forces. Between obligations to the Pact and other matters, House Redoran is spread thin of late."

Councilor Eris hired me to find his daughter, and that's what I plan to do.

"As you say. Ferhara's Warclaws take their contract as seriously as you do, however. Get in their way and I can't guarantee your safety."
I'll keep that in mind.

Warclaw Ferhara: "Ferhara assumes the councilor's minions will not present a problem for the Warclaws, yes, Captain?"
Captain Brivan: "The Outlanders have been warned, Ferhara. I leave everything else to your discretion."

If you speak with him again:

"You're free to do as you wish, but I suggest you let us finish this. Once the Warclaws catch the scent of their prey, they become rather singleminded. I'd hate to have to report your injury or death to Councilor Eris."

Veya Releth: "Oh no, we're surrounded! And that's my father! What's he doing here?"
Captain Brivan: "Sweep the caves. If you spot Veya, report back to me. She's not to be harmed!"
Councilor Eris: "I prefer that you don't harm the agents I hired, either. There's no need for bloodshed."

As Veya heads in the other direction, you'll agree to meet with the contingent below:

Captain Brivan: "Halt! Who goes there?"
Councilor Eris: "Stand down. These Outlanders work for me."
"Well, look what the cats almost dragged in. I'm not sure what happened in the cave, but I suspect you have a lot to answer for, outlander."

After speaking to the councilor, he'll warn:

"The councilor thinks you can help, but I'm not sure you have the best interests of House Redoran in mind.
My Warclaws will continue to hunt for Veya. I suggest you stay out of their way."

Captain Brivan: "What's going on down here? It sounds like a—you! What are you doing here? Explain yourself!"
"What in the name of the Three are you up to? I thought you worked for Councilor Eris?
You better have a damn good reason for killing the mercenary leader. I ought to sound the alarm and let her warriors deal with the likes of you."
I came to warn you. Veya knows what you did. She wants to kill you.
"Veya? She's barely out from under her mother's apron and she presumes to judge my actions?
No matter. Whatever your motives, nothing justifies the blatant killing of Ferhara and her mercenaries. Councilor Eris can't protect you this time, Outlander."
What about your motives? Ulran's exile and death are on your head.
"Ah, now everything becomes clear. Veya learned something of her brother's fate and wants to retaliate? Then let her come!
But know this. I merely set the events in motion. I didn't conceive the plan."
Then who did? Tell me who's responsible for what happened to Ulran.
"You're looking for the responsible party? Then look no further than Councilor Eris. He wanted to prove his son's loyalty to the House. To show that Ulran's fascination with the savage Ashlanders hadn't corrupted him.
Well, look how that turned out."
This whole thing started as a test of Ulran's loyalty?
"A test Ulran failed. Eris was devastated when his son sided with the savages and his daughter ran away. He decided to resign his position. He'll make the announcement today.
Eris hopes to restore his family, but I think it's a lost cause."
Especially if Veya finds out that her father set all this in motion.

Veya will sneak up behind the captain and stab him:

Veya Releth: "That's for Ulran. Choke on your own blood, you bastard."
Veya Releth: "My father, the entire council, they're all guilty. They all have to die. I have to do this, so stay out of my way."
Naryu Virian: "Veya actually did it. She killed Brivan in cold blood."