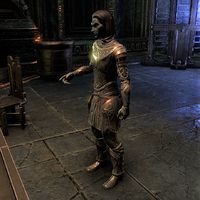 Apprentice Idrono is a Dunmer Apostle apprenticed to Lector Naril at the Everwound Wellspring. You'll find him in the Sunless Garden Workshop.

Oasis in a Metal DesertEdit

When you first approach Idrono (as part of the quest), he'll give you some information about the other apprentices in the Everwound Wellspring:

"A new apprentice? How curious. And are those samples of Chirrhari's mushrooms? Excellent! I've been anxious to taste the new harvest.
Hmm. Texture similar to guar hide. Flavor equivalent to wet moss. Not what I hoped for."

Speaking of apprentices, we were curious about the last few that were selected.

"Interesting question. As far as I know, no new apprentices have entered the Wellspring since Gathal's accident.
But I have a bigger concern. At least Chirrhari can grow mushrooms. My plants refuse to live, no matter what I do."

But the Wellspring produced a bountiful harvest. Are you doing something different here?

"Of course. Lector Naril tasked each of us with a different experiment. I'm attempting to grow plants without the benefit of the simulated sunlight. I haven't had any success so far, but someone has to tackle the difficult experiments, I suppose."

"Lector Naril developed it using techniques he still refuses to share. The simulated sunlight provides nourishing energy that makes most of the plants we grow thrive.
Not my plants, mind you. Oh no. That would ruin the experiment!"

Is there anyone else we can ask about the other apprentices?

"Ohtowen's been with Lector Naril the longest. She might know something more.
You'll need to cross my garden to reach her. Just watch out for the blasted fabricants. They keep eating my plants and clogging up the gears!"

I'll watch for the fabricants on the way to talk to Ohtowen.

"I just don't understand why my plants won't grow while Chirrhari and Ohtowen have no trouble making things bloom. It's an absolute annoyance!
And so are those fabricants. Feel free to smash them to bits on your way through the garden."

Tell me about Gathal's accident.

"What's to tell? Gathal died. Happened in Lector Naril's private workshop. We're not allowed in there anymore.
Now let me think. I need to figure out how to make my plants do something—anything—other than wither and die."

Apprentice Chirrhari: "How horrible! Those apostles … all dead!"
Sherizar: "Not just dead. Drained of life to create the simulated sunlight."
Apprentice Ohtowen: "Still, it's an amazing device. Lector Naril's a true genius."
Apprentice Idrono: "A genius? Look at this! Naril's insane!"

If you decided to continue with sacrifices, they continue to talk:

Sherizar: "Naril's dead, but the promise of the Wellspring lives on."
Apprentice Chirrhari: "You're not suggesting we continue to … to kill people?"
Sherizar: "We call for volunteers. Use their sacrifices while we continue to work on finding a different source of power."
Apprentice Ohtowen: "How noble. I assume we won't be the ones volunteering this time?"
Apprentice Idrono: "Sherizar has the right idea. And I offer myself as the first sacrifice."
Apprentice Ohtowen: "Idrono, no!"
Apprentice Idrono: "It's only logical. I'm an apprentice whose experiments never worked out. Allow me to contribute in another way."
Sherizar: "Very well. Let's go make the necessary preparations."
Apprentice Chirrhari: "One death … to avoid many. This one still doesn't like how this all turned out."

If you decide to stop the sacrifices, they continue to say: (?)