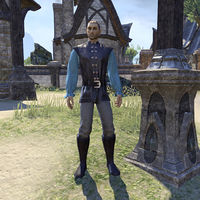 Advisor Norion is an Altmer member of Queen Ayrenn's court. He can be initially found outside a warehouse in Vulkhel Guard.

While in Vulkhel Guard, if you talk to him outside the related quest, he'll only say, "Begone, insect. I've no time for your ilk."

The advisor is one of the people Watch Captain Astanya will ask you to speak with. He won't be very friendly:

"I'm busy here. Away with you."
I'm supposed to tell you Watch Captain Astanya sent me.
"Ah. Ahh. In that case, you'll do nicely.
My servant followed a burglar to this warehouse. The ignorant knave stole a set of marine deployment plans for the Queen's upcoming speech."
Why would a burglar steal those?
"Well, I'm sure I wouldn't know. I'm no burglar. In any case, we can't let those plans escape.
They could be used to bypass the Queen's security. And we wouldn't want that."
I'll check it out.

Once you have the plans in hand, you can return to Norion outside.

"Well? Did you find the plans?"
I found them, but the burglar was already dead.
"Oh? A pity.
Keep the plans. You can give them to the captain next time you see her. In the meantime, I must attend to the queen."
You're not concerned about the dead burglar?
"Feh. Some kind of criminal feud, I'm sure.
Now then. If you have some other task, you should be about it."

If you chose to talk to him first, you can ask him further about the steward.

I'm to help a Steward Eminwe. Do you know where she is?
"Do I look like a steward's assistant? Do you take me for a commoner? No. But, yes, I happen to know where she is.
East warehouse, just north of the docks. You can go now."
Thanks. I guess.

Talking him after the quest, he'll say, "Hmph. Well done, I suppose."

After you have arrived at Tanzelwil, you will quickly learn that Norion has betrayed the Queen and is part of the Veiled Heritance. As you fight your way through the Tanzelwil catacombs with Queen Ayrenn, his projection will appear and then taunt Ayrenn. At the same time, he will summon angry spirits. 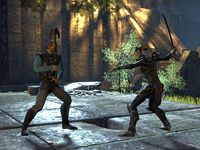 Inside the Ancestral Chamber, Norion will be waiting for you. When you confront him, he will shout at Ayrenn:

Norion "Foolish girl! I serve the Veiled Queen! She is our true leader!"

He will be wielding a maul and will also summon waves of Ancestral spirits who all have things to say.

The Wilderking will want to see a sample of your skills before agreeing to assist you, so he'll call up the spirit of Norion as a test. Norion will appear and taunt:

Advisor Norion : "Strike us down, but the Veiled Heritance will always rise again!"