This page provides descriptive summary information on all the creatures added by Stirk. 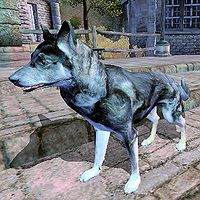 Acrisus is Hannia Kynarius's pet dog. He is very attached to his owner, and will follow her around all day, providing her company during her long outdoor walks. If Hannia dies, Acrisus will be found barking and howling in agony next to her corpse. Like many dogs, there is a 10% chance he may infect you with Witbane.

His devotion to Hannia is not misplaced as she will say: "Have you met my dog, Acrisus? He's just the cutest thing!" 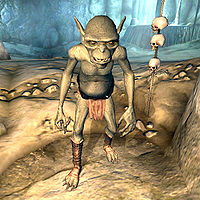 They seem to be of a particularly adventurous breed, unafraid of venturing out of their base and even raiding on the high seas. They also seem to lack the narrow-mindedness of their Cyrodiilic counterparts and are known to take prisoners during their sorties. Once you free Jean Ciscotte from the tribe he will tell you: "I thought I was saved when I saw a boat, and was helped into it. As I passed out from exhaustion, I saw that the face looking down at me was not a man's but a goblin's." Helga Open-Legs will also tell you: "But I saw something in the wreckage: a smaller boat. I considered climbing into it, as I had seen some men do. Then I saw those wicked creatures. Goblins!"

The inhabitants of Stirk know all about the Goblins and their hide-out: "Goblins? My goodness. The only place I can think of is Broken Fang Cave. It's a small one, hidden on the north coast of the island." However, for a reason or another, they have never done anything about it. 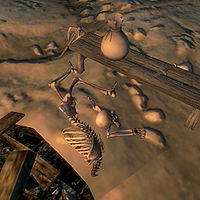 Captain Steller was the Redguard captain of the Kintyra II. He was taken prisoner by goblins along with Cassius Stirk III and Jean Ciscotte when his ship sunk. He eventually met his demise in Broken Fang Cave; and judging from what's left of him, it must have happened soon after his capture.

Once you free him, Jean Ciscotte will tell about him: "The captain of the ship, a Redguard by the name of Steller" When talking about captivity he will recall: "First they killed the captain, and then they killed Cassius." 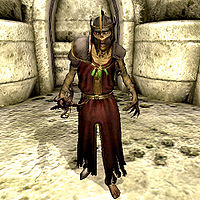 Maugrue the Steward is a lich who was imprisoned in Vassa Morisel over five thousand years ago by the Ayleids living in the ruin. The door to his prison could only be opened if four people sat in the thrones in front of it. Unknowingly, Therander Polle will free him during the quest The Secret of Vassa.

After slaying his liberator, Maugrue will make his way towards the thrones and deliver a shot speech: "Finally, after over five thousand, Maugrue the Steward is freed from his Ayleid captors! And it appears that someone has been kind enough to leave some soon-to-be corpses from which I can begin to raise my vengeful army!" After this, he will kill Amarius Eulius and proceed to attack you and your companions.

Once you have slain him, the people of Stirk will manifest their surprise and happiness: "I had no idea such evil existed beneath our island!" and "I heard how you defeated the lich. I cannot thank you enough for your bravery." 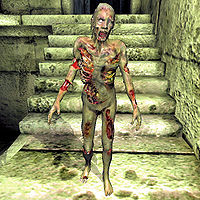 Two varieties of Zombies can be found on Stirk, and both are part of the Undead Faction. Similarly to regular zombies they have a 25% chance of carrying one of the following diseases: