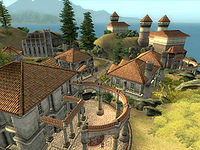 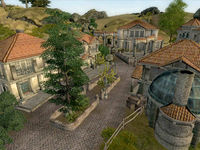 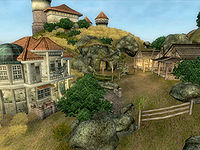 Polle Gold Mine and Therander Polle 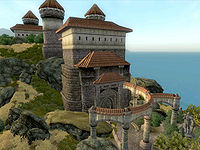 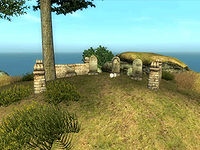 Stirk is a small town on the identically named island. It was built during the Altmer invasion of Cyrodiil, to allow the Imperials to attack them from behind. The town now consists of a few manors for wealthy citizens, a gold mine, the imposing Fort Stirk and the Stirk chapel. It also has a little harbor with a lighthouse. It has been ruled for centuries by the Stirk family, the current ruler is Interim Captain Cartello Stirk, after the mysterious disappearance of the real captain, Cassius Stirk III. It only has one shop, the Eulius Brothers' Book Store, although there is a smith present in the fort. There are no inns on the island, but, as everyone will tell you, the beggar Alden the Wanderer is willing to rent out his bedroll.