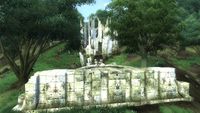 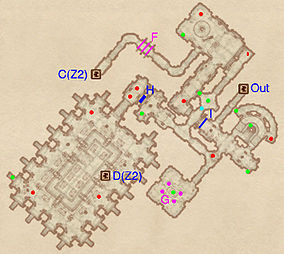 This zone is pretty complex, with quite a few intersects and winding corridors. Many of these are on higher ground in regards to the level of this zone and fighting an enemy there is probably going to alert others underneath you. To reach the second level of this dungeon, Welke Ceyede, you can use either door C or D. The choice is really up to you as a player, as you won't miss out on major loot by going either way. If you want to explore the entire ruin, you must use D or you will have to backtrack through multiple zones later, since the door at H can only be opened from one side.

Immediately at the start you will find yourself at an intersect. Left leads to door D, after a decent amount of further intersects and corridors. There is a small room located slightly off course which has a minor loot chest in the middle; when you loot it, the four Gas Traps (G) around it will activate. Another obstacle is the Hidden Door at H. To open it you will have to activate the pressure plate (cyan dot on map) that can be found on the corridor directly above gate I. Once the door is open, two enemies will be released.

If you decide to head right through the locked gate at I, you will find the going easier and eventually end up at door C. If you don't want to pick the lock of the gate, you can jump down behind it from the corridor above it. The only obstacle thrown in your path is the Swinging Blade trap at F. 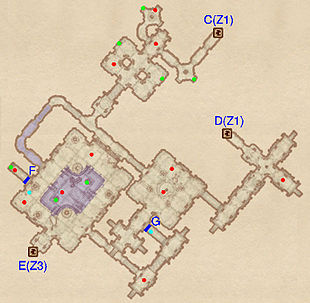 You can enter this zone from either door C or door D. Both paths eventually lead to door E, the only entrance to the final zone, Welke Edesel. If you only want to grab loot, the former is recommended, since it gives access to all of the minor loot chests in this zone.

The largest room in this level can be reached by swimming through a corridor and then surfacing in the middle of the room. Water Breathing isn't necessary if you don't waste time. The under-water section contains a Slaughterfish and two minor loot chests, hidden inside the two columns.

In the southeastern corner is a Hidden Door at F, which is activated by stepping on the pressure plate in front of it (cyan dot on map). Behind it are an enemy and a minor loot chest. Taking the corridor opposite the Hidden Door leads to a second one, G, which is opened in the same way and which leads back to door D.

This final zone consists of one single chamber and contains the Ayleid Statue (S) needed for the related quest, the Boss chest (B) and the Boss-level Undead guarding it (A). There are also 6 Welkynd Stones and a Varla Stone (V) in the various alcoves. Behind some of the pedestals are three minor loot chests.