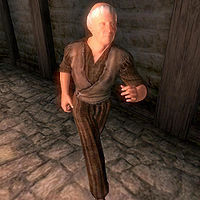 Rufio in the Inn of Ill Omen

Rufio, a Breton pilgrim, resides at the Inn of Ill Omen. He is targeted for assassination in the initiation quest for the Dark Brotherhood, A Knife in the Dark. His assassination was arranged by Claudius Arcadia.

Rufio will only appear once the quest has been initiated. He will sleep in his bed from 6am until 2am, at which point he gets up and wanders around his room for four hours. If you talk to him he will run out into the hallway, unlock the door to the other room and cower next to the bed.

While hiding out at the Inn, he tries to attract as little attention as he possibly can, wearing a set of a coarse linen shirt, with matching linens and a pair of oiled linen shoes. He carries nothing except a small amount of gold.

Knowing perfectly well that he has done a terrible deed, he will try to defend himself as soon as you approach him: "Who are you? What do you want? I ain't done nothin'!" When he realizes your purpose for contacting him he will yell: "Oh, please, no! I can pay you! Name your price! Anything! Anything! Please, just let me live!" If you accuse him of having done something to deserve death, Rufio makes the following comment: "No! Please! I didn't mean to do it, you understand me? She struggled! I... I told her to just stay still, but she wouldn't listen! I had no choice!"

When he gives you the contract on Rufio's head, Lucien Lachance has the following to say: "Know that Rufio is old and weak, and sleeps his days away. You could kill him before he even has a chance to wake, if you so choose." When you ask around at the Inn, Minerva can provide you with a bit of extra information: "Not a lot to tell. He doesn't much like company, and spends most of his time in his room. Manheim thinks he's hiding out from someone." If you ask Manheim Maulhand, he will say the following: "Rufio? He's an old codger. Been living here for a couple of weeks now. If you ask me, he's hiding from something. But what do I care? He pays his tab."

If you kill Lucien Lachance after being offered the contract on Rufio, he will still spawn in the Inn of Ill Omen. If you attempt to engage in conversation with him, he will brush you off, saying "I... I ain't got nothing to say to you. Leave me be."