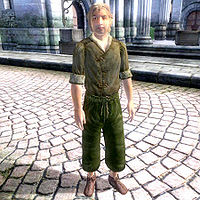 Ris Fralmoton is an Imperial ostler that never actually appears in the game, although he is listed in the Construction Set. He is set up as an ostler (horse seller). He owns a vendor chest in Red Diamond Jewelry, which presumably originally sold horses, as it was called "The Bit and Bridle".

He was supposed to sleep between midnight and 6am and eat meals from midday to 2pm and 6pm to 8pm. For the rest of the day he would wander around. All of this would have taken place at his editor location.

Ris would have worn green felt linens, a collared shirt and a pair of thick cowhide shoes and carried the Bit and Bridle Key, as well as one or two septims.