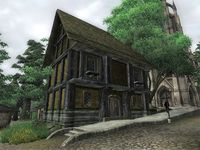 Ra'Jahirr's House is across from Best Goods and Guarantees in Leyawiin. The house is situated just north of Cingor's house.

It is the residence of Ra'Jahirr and consists of only one zone, Ra'Jahirr's House. 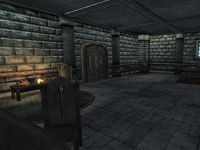 The large main floor holds little of interest. A low table by the door has a handbill for the Five Claws Lodge and a copy of Gods and Worship. A small wine room on the first floor contains two wine racks holding seven bottles of cheap wine, seven bottles of Surilie Brothers wine, and seven bottles of Tamika's West Weald wine. A chest in this room holds three bottles of skooma. Among the ingredients on the main floor are two ears of corn, a loaf of bread, two pumpkins, and a cheese wedge. Another sack in the house contains grain. The second floor bedroom contains three chests of drawers containing clothing. A handbill from Southern Books is on a small table. Many of the containers hold clutter: seven crates, six sacks, five barrels, three chests, two cupboards, and two desks.