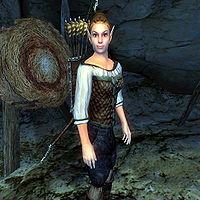 Melliwin "the Mongrel" is a Wood Elf sharpshooter who can be found in the southeast corner of the main part of Dunbarrow Cove, along with several archery targets, after you purchase the "Fletcher" upgrade from Dahlia Rackham for 1000 gold. She sells bows and arrows (including unique enchanted ones). She provides training in Marksman up to level 75.

Melliwin wears a quilted doublet, rugged pants and a pair of leather boots. She is armed with a steel bow and iron arrows, as well as a lettuce. Melliwin can also use spells from the Mysticism and Restoration schools of magic; these are the same spells that you can cheaply buy off her, as her Mercantile is a mere 6.

Melliwin provides training and sells spells 24 hours/day, but she will only buy and sell items from 9am to 9pm. During those times, she can be found in the southwest corner of the main cavern where she will either be practicing her archery or standing around (ostensibly enchanting arrows).

She sells the following spells: