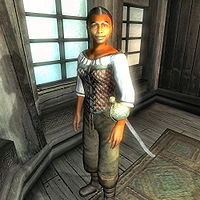 Dahlia Rackham is a Redguard bookseller found on board the Sea Tub Clarabella, which is docked in the Anvil harbor. After you have defeated all seven Red Sabre Skeletons in Dunbarrow Cove, you will receive a quest update telling you to speak with Dahlia to hire a crew.

She wears a quilted doublet, sack cloth pants, a jade necklace, and a pair of leather boots. She is armed with a fine steel cutlass.

Purchasing the upgrades from Dahlia are done via the "Dunbarrow Cove Upgrades" dialogue rather than using the standard purchase menu. One implication of this is that her prices are fixed and are not subject to haggling.

Dahlia spends her entire day walking around the deck of the Clarabella, never eating or sleeping.

She sells the following upgrades to Dunbarrow Cove: