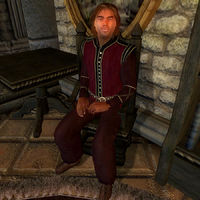 Marc Gulitte, a Breton mage, is an Evoker of the Mages Guild who offers advanced Destruction training and Recharging services at the Anvil Guild Hall.

Similarly to Guild head Carahil, he lives a relaxed existence, spending most of his free time reading the cheap text Brief History of the Empire, v 2. He does so every day, starting just after having woken up, from 8am until 9pm; taking a three hour break at midday to eat lunch. At 9pm he eats dinner for three hours, until midnight. At 1am he finally calls it a day and heads up to the living quarters for seven hours of sleep.

He wears a middle-class attire consisting of a burgundy linen shirt, burgundy linens, and a pair of thick cowhide shoes. He also carries a small amount of gold and his book. He doesn't wield any weapons, relying instead on a series of medium-high level Restoration spells, ranging from absorb skill, to fortify magicka, to absorb health. These are also the same spells that you can buy from him for a cheap price, since his Mercantile is a mere 7. He will always offer his services when not eating or sleeping.

When met for the first time, he'll tell you something about himself: "Marc Gulitte, Mages Guild Evoker, Advanced Instructor in the Arts of Destruction." If asked about the city, he'll give you some background information on the Anvil chapter: "Carahil inherited the Anvil Mages Guild chapter from Hannibal Traven, the Archmage [sic]. She runs a clean hall, just like Traven did." He is clearly pleased with Carahil as a guild leader and will tell you: "Carahil's a good leader. She's been a staunch supporter of the Council of Mages for as long as I've known her." If you haven't joined yet he'll encourage you to: "If you're applying to join the guild, you'll need to speak with one of the local guild heads. Carahil would be the one to talk to here."

As an advanced Destruction trainer, he can provide you with the reference needed to initiate the Destruction Master Training quest. Speak to him when your Destruction skill is 70 or higher and choose the training option, which will trigger the quest and the following dialogue: "If you want to learn more about training Destruction magic, you'll have to find Bralsa Andaren." Should you ask him again he will expand: "The only way you can learn more about Destruction magic now is to find Bralsa Andaren. She can train you better than anyone. Good luck finding her, though. The latest I heard was that she had wandered off into the wilderness, looking for a shrine to Kynareth."