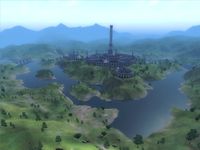 Lake Rumare is a large lake completely surrounding City Isle and the Imperial City. It's primarily inhabited by a dangerous variety of slaughterfish.

Many phrases in the local vernacular refer to Lake Rumare, such as "throwing money into Lake Rumare" to save time instead of "visiting that dump (the Imperial City)".

The main bridge across the lake is called the Talos Bridge and is located on the west side, between Weye and the Chestnut Handy Stables. Another wooden bridge (not marked on your map) is to the north, fording Fort Empire and Fort Caractacus. An island on the southern part of the lake houses Fatback Cave. The Ayleid ruin Vanua can be found southeast underwater, before the lake opens into the Upper Niben.