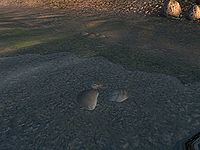 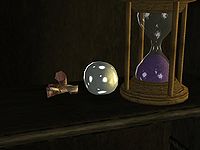 Clams are shellfish commonly found underwater or along the shore. They can be harvested for flawed pearls or pearls, but never flawless pearls. Unlike plants, clams act as containers, allowing you to place items into them as well as take the pearl out. They do not respawn, making them useful for storage, but meaning they will never produce more than a single pearl. There are three different types of clams, although it is only a visual distinction.

There are a total of 318 clams. The Vile Lair official plug-in adds an additional 8 clams; similarly, Knights of the Nine adds 3.

All clams have a 75% chance of containing a pearl. At level 1, only Flawed Pearls can be found. Once you reach level 3, there is a 25% chance of finding a regular Pearl instead. At level 5, this changes to a 40% chance, and at level 9 it rises to a 50% chance. The contents of the clam is decided when you first enter the area where it is located, not when you open it.