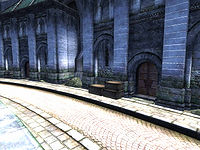 The three doors on the inside of the harbor wall lead to the Imperial Trading Company Office, where Company Boss Damian Magius resides, and two warehouses. Every morning at 9am, Damian will unlock the two warehouse doors, giving the many employees access to their workplace. The employees mostly consist of poor Waterfront District residents, but also higher class citizens like Algot the Northerner from the Temple District who works here. At 6pm, Damian Magius will lock up the two warehouses for the night and all the employees will return to their homes.

The office is entered via the northernmost door on the inside of the harbor wall, closer to The Marie Elena than The Bloated Float Inn. In the west corner sits a food cupboard and three apples strewn on the floor. Three barrels and two chests sit against the southwest wall and they all contain clutter, as do the two non-respawning sacks nearby. The door in the southern corner leads to the basement. Next to the stairs two crates contain more clutter, as does a final non-respawning sack. At the top of the stairs, the door leads to Damian Magius' private quarters. 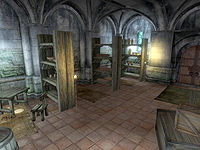 This warehouse is accessed through the easternmost door on the inside of the harbor wall, closest to The Bloated Float Inn. The layout is almost exactly the same as the office, with three barrels, two chests, and two non-respawning sacks, all containing clutter, against the south wall. Three apples lie in the floor in the southwest corner, and the door in the southeast corner leads to the basement. Two clutter crates and a non-respawning clutter sack lie on the east wall, beside the stairs, and the door at the top of the stairs leads to the private storage.

Again, this basement is very similar to the office basement, with a clutter barrel and chest at the first stairs landing. At the foot of the stairs, a repair hammer lies on a set of shelves. In the northwest corner sits a non-respawning clutter sack, and another sits against the center post. In the southwest corner sits a crate that contains clutter, as do the three barrels in the southeast corner. 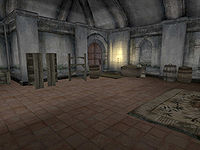 Upstairs in the western warehouse

This warehouse's layout is exactly the same as the other. Three barrels, two chests, and two non-respawning sacks against the southwest wall all contain clutter. Three apples lie in the floor in the west corner, and the door in the south corner leads to the basement. Two crates and a non-respawning sack next to the stairs also hold clutter, and the door at the top of the stairs leads to the private storage.