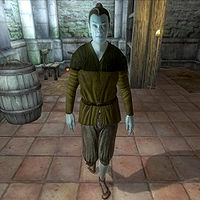 Dranas Llethro is a Dark Elf commoner living inside the Abandoned Shack in the Imperial City's Waterfront District. He recently returned to Cyrodiil from Solstheim, where he was employed in construction at the Raven Rock colony.

Living in the shack with him is another ex-employee from Raven Rock, namely Hillod the Outlaw. But while Hillod is on the lam, Dranas is on the lookout for employment and spends most of his time socializing with the dockside workers, trying to make a good impression. He wakes up in the shack every morning at 6am and spends the first two hours of the day wandering around inside. At 8am, he leaves and heads for the Imperial Trading Company Warehouse and spends the rest of the morning and most of the afternoon there, until he finally goes back to the shack at 5pm for some more wandering. At 9pm, he sits down on one of the two available chairs and eats a two-hour dinner before he goes to bed at 11pm. An exception to this routine occurs during the Misdirection quest, when all Waterfront District residents are confined to their homes. Dranas will also be forced to stay inside the shack during the Light the Dragonfires quest, when all citizens are confined to their homes by martial law.

He wields an iron dagger and wears a set of lower-class clothing, a dark green shirt with breeches and oiled linen shoes. He only carries a small amount of gold.

When you meet him for the first time, he will politely introduce himself and tell you about the island of Solstheim: "Dranas Llethro. I just got back from Solstheim. Boy, was that a mess. And now I'm out of work." And he will elaborate if you ask him about his city of choice: "I signed on for the Raven Rock colony. Went there as a builder. Hung around afterwards, but the money ran out."