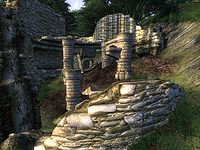 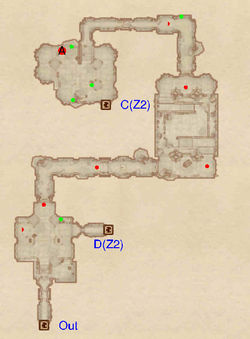 This zone is very linear, consisting of three rooms and the two corridors linking them. You will also never face more than two enemies at the same time. There are minor loot chests in the first room and in the corridor linking the second and third rooms. The final room contains a boss-level Necromancer (A), three minor loot chests and door C to the next zone. The boss-level necromancer only appears during the related quest. 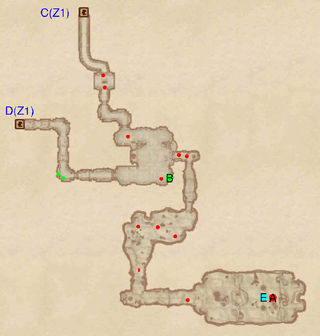 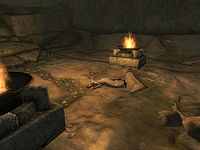 Upon arrival, you will be plunged in the midst of a fight between Necromancers and Daedra, so wait out the conflict and then attack the weakened survivors. In the first corridor and room there are two necromancers and four daedra, as well as a boss chest at B.

Head east through a hole in the wall and into a cave. In the next room again, wait out a fight between a necromancer and up to three daedra before striking. In the final room are two more daedra, one of which boss-level (A). Provided you are on the relevant quest, you will also find the corpse of Irlav Jarol (E).

Head back to the first room and head west: there are two minor loot chests on the way to door D, which leads back to the previous zone and is only unlocked once you have the Bloodworm Helm in your possession. As such, you are unable to use it before or after the related quest.