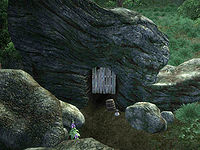 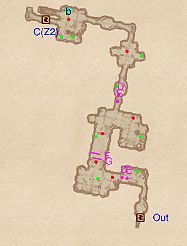 Collapsed Mine is an unremarkable, entirely linear structure with a healthy amount of treasure compared to the opposition. Simply make your way through the tunnel, looting the chests as you go along. Avoid the Pressure Plate Triggers at E and use the Falling Logs released by the Tripwire at G to your advantage. When all is said and done, enter door C, leading to the second zone, Collapsed Mine – Breakthrough. 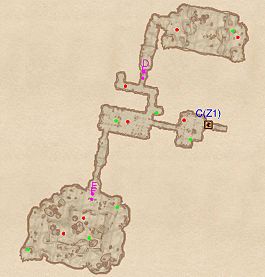 This zone resembles the previous one; with the exception of the expensive equipment worn by the inhabitants, it is an unremarkable place and the biggest challenge is deciding whether to go north or south at the intersection in the second room. Avoid the two traps welcoming you to each of the larger rooms (both triggered by a Pressure Plate at E) and kill the opposition as you go, looting the variety of minor loot chests you encounter. When you have cleared everything, head back to door C and return to the first zone, Collapsed Mine.