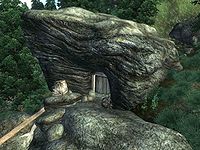 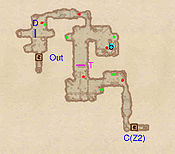 The entryway of the Abandoned Mine is small and claustrophobic, with little room for movement and little space for exploration. Dispose of the sole enemy guarding the first wooden structure, claim the loot from the locked chest, then push the loose planks at D three times to gain access to two barrels. Follow the path as it bends and keep an eye out for the many silver and gold veins of the mine. Pry open the potion chest near the bedroll at b and locate another chest in the opposite side of the room. Head south and be prepared for a Falling Log Trap (T) that will trigger when you approach. In the next room, kill the lonely enemy and proceed in a western direction, on your way claiming the loot from two chests. Exit the zone via door C, which leads to Abandoned Mine Caverns. 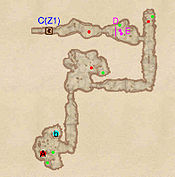 The Abandoned Mine Caverns consist almost entirely of wide, open corridors. Enemies are also spaced such that if you are careful in your combat range, they can be individually defeated without drawing attention from others. It is entirely linear as well, so simply make your way through the tunnels and jump over an easy-to-spot Tripwire trigger at D, keeping the two Swinging Maces at E attached to the ceiling. Loot the chests you encounter along the way and pass through two wooden doors until you reach the final large room for an encounter with the boss-leveled Bandit at A. Pick up the minor loot from the two chests and backtrack all the way to door C, leading back to Abandoned Mine.