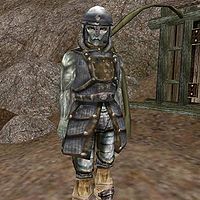 Vatollia Apo is a Dark Elf guard and Spearman of the Imperial Legion guarding the entrance to the Gnisis Eggmine.

He is wearing common pants, netch leather boots, and Imperial chain coif, cuirass and greaves. He also carries an Imperial Shortsword and the key to the Gnisis eggmine. Aside from his natural resistance to fire and the sanctuary provided by his ancestors, he knows no spells.

If you raise his disposition to 70 or above, are a member of the Imperial Legion (the usual rules regarding wearing uniform apply), or are carrying a miner's pick in your inventory, you can get him to give you the key, selecting the eggmine dialogue topic. Alternatively, you could just kill him and take the key from his corpse.