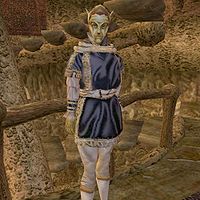 Sinyaramen is a High Elf trader and a guest at the Gateway Inn in Sadrith Mora. He is waiting for some potions he ordered from Tusamircil, at the Mages Guild. Upon delivery of the potions, he will tell you about his family, and how his grandfather, a vampire hunter called Vilandon, was killed by a vampire called Kjeld.

He wears an extravagant shirt, pants, and shoes. He carries an iron mace and 50 gold. Aside from his natural weaknesses to fire, frost, shock and magicka, his natural bonus to magicka, and resistance to disease, he knows the spells Slave Belt, Touch Dispel, Self Dispel, Purge Magic, and Demoralizing Touch.

"I will not speak with your kind, vampire."
I have the potion you ordered.
"Very well. What do you want?"
family crest
"Yes, that ring bears the seal of my great family. Where did you get it? Never mind. I'm sure it was taken off one of my ancestors killed by your kind."
killed by your kind
"Yes, my grandfather was killed by a vampire. It is no surprise. He hunted your kind to earn his bread. After his mother and father were slain by your ill breed, Vilandon spent his life trying to hunt you all down. It was his end, though. A vampire named Kjeld finally killed him, though it is said it was a long and bloody fight. But, that was hundreds of years ago. I will speak no more with you."

Many members of the Mages Guild will direct you to Sinyaramen during this quest:

Mossanon
"A High Elf named Mossanon? Yes. I saw a High Elf in the market and introduced myself. He was with a local Telvanni woman -- I don't recall her name. I have seen them around several times since, but they both seemed a bit shy and quiet -- and quite taken with one another -- so I didn't intrude. Perhaps you might ask the ladies of the town. A Dark Elven woman with a High Elven friend might excite comment."