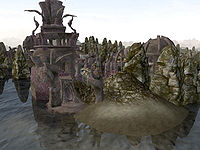 Onnissiralis is a shrine to Sheogorath southwest of Vas. It can be found on a small island of the Sheogorad region, a little way west of Vas and north-northeast from Ald Redaynia. There are six hostile cultists here. The loot here is three pieces of raw ebony (one of them cursed), two rubies, and two diamonds.

With Helm of Tohan installed, the eponymous Adamantium helmet can be found here. Two brothers, Dalin and Daris Norvayne, hang around outside the shrine. If you talk to them, they will stage a fistfight between them to determine who will accompany you. Dalin is a swordsman with an enchanted sword, and Daris an archer with enchanted arrows. 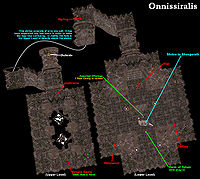