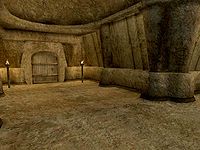 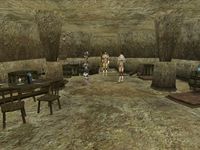 A quest given by the Morag Tong takes you here. A total of four outlaws reside within, one of which will attack you on sight. There are two shrines here, one for the Tribunal, and one for St. Nerevar. The loot consists of various items of mostly little value; moon sugar, and a couple of gold pieces are littered throughout the crates. There are three locked chests, none of which have keys. They contain gold and a random weapon.