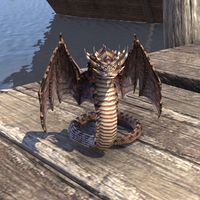 Sep Adders (also known as Sep Vipers[1]) are venomous winged snakes most commonly seen with brown scales and crimson eyes. While they are commonly seen in southern Hammerfell, particularly on the Hew's Bane peninsula, they also been witnessed in northern Elsweyr. Despite being winged, the Sep Adder cannot fly but can use them to glide short distances.[2] They have also been observed to use their wings in threat displays and to shade their heads from the sun.[3] The diet of the Sep Adder is varied as they have been observed to eat both insects and fish as well as small rodents,[2] they are constantly on the hunt and are capable of pouncing on prey from a great distance. However, they are also edible and are described as being easy to "skin and cook", akin to a chicken.[3]

Sep adders are often described as having a mean temperament and short tempers, like badgers in snake-form. However, this has not stopped people from attempting to tame these reptiles as pets.[4] Other than the common Sep Adder, there are a few known subspecies; the Cobalt Sep Adder is rarely seen in captivity but is prized amongst the Hammerfell nobility for its rumored ability to be able to detect poison in drinks and food.[5]. Another variety, the orange-scaled Infernal Sep Adder, is known to inhabit the high altitudes regions of Hammerfell.[6]